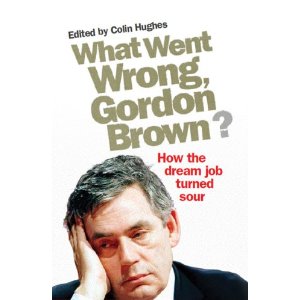 Gordon Brown believes he still has a chance of winning the top job at the International Monetary Fund, telling friends he has global backing that could trump the opposition of David Cameron, his successor in Downing Street.

I hate to say this , but dear old Gordon has about as much chance of landing the job of IMF head as Nick Griffin becoming Prime Minister.
Gordon wants his payoff.  He signed the Lisbon Treaty just like he was told.
But earlier he stopped Blair from putting Britain into the euro, imagining that that would be his job.  Trouble is he felled Tony who might have cracked it and then bottled his own chance of an election victory, and was scuttled out of power by Nick Clegg, making false promises of a coalition with Labour.
The IMF needs someone.  It’s true.  But why do they want the biggest loser of British politics from the last quarter century?  It’s unlikely, I would suggest, Gordon.  Why not write some more books to help find a cure for people with insomnia.  Then they can enjoy lovely dreams just like yours.
The Tap Blog is a collective of like-minded researchers and writers who’ve joined forces to distribute information and voice opinions avoided by the world’s media.