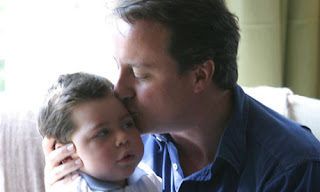 Cameron approves of Gaddafi’s children and grandchildren being killed, but not his own.
Pictured with his son Ivan who died, and caused him great grief.

David Cameron has defended Nato’s choice of targets in Libya after an airstrike apparently hit a building where Muammar Gaddafi was staying and killed his youngest son.

The Prime Minister insisted individuals were not being targeted, and UN Security Council resolutions permitted attacks on “command and control” bases.
But the Libyan regime reacted furiously, branding the missile strike an illegal assassination attempt.
Mobs also stormed diplomatic premises belonging to the UK and other Nato members in Tripoli, prompting Foreign Secretary William Hague to expel Libya’s ambassador from London.
Saif al-Arab Gaddafi, 29, the dictator’s sixth son, died when his house was hit by at least one missile fired by a Nato warplane, according to Libyan government spokesman Moussa Ibrahim. “This was a direct operation to assassinate the leader of this country. This is not permitted by international law. It is not permitted by any moral code or principle,” Mr Ibrahim added.
That sounds right to me.