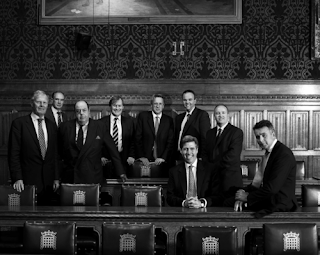 David Cameron is addessing The1922 Committee wednesday.
Picture with Chairman Gaham Brady front.
(Watch that Soames bloke, about as trustworthy as his grandfather).

David Cameron is addressing the 1922 Committee on Wednesday night.  It was lobbying from this direction that made him realise he had to defeat AV, or his Parliamentary Party would have drifted away from him, and his leadership could have come under threat.

By defeating AV though, the influence of the 1922 and the backbenches is unlikely to reduce.  On the contrary, the ability of the Lib Dems to set the agenda for the Coalition must, from hereon, be at a point where it will start to lessen.  The Conservatives are now neck and neck with Labour.  Labour are losing support in Scotland to the SNP, and up to 8% of votes are now housed over at UKIP.

The surge of UKIP has got to be contained, if the Party is to retain its preeminence.  That will require a stream of policies which start to repair the damage done to Britain’s social fabric by the onslaught of EU regulation, and the bureaucratisation of government and corporations that has taken place.

If Theresa May can, as she claims, ‘set the Police free’, and bring in local democratic control of policing, if the health industry can be placed into the hands of doctors, and less in the hands of ‘business’ managers, if schools can start to teach children to a proper standard, and if the social programmes of IDS can reduce state dependency, the natural support for a Conservative government amongst voters must start to rebuild.

If on the other hand the state of the country deteriorates further, the Party will rightly be hammered by UKIP at the next election.  The Lib Dems could continue to fade to the point that they are electorally useless.  And it could be UKIP by 2015 which holds the cards, if the current surge were to gain ground.  The only way to do something, then, if things in Britain deteriorate, will be to move Cameron on, and replace him with a new leader, who is  not sold out to the programmes of the One World Government.  It is, after all, from there that most of our troubles are originating.

Cameron told the 1922 a year ago that they must get used to the New World Order, as there is no choice to be had.  The problem is that the situation of governments around the world is becoming impossible, as authority is removed from national level.  It is ultimately the New World Order which must withdraw from the management of the nations.  And it is that which the 1922 Committee should be telling David Cameron this week.  They could start by asking about the role of Common Purpose in Britain’s government.  He has, after all, been attending their conferences, unannounced in the media.  What is he, and what are they up to, please?

Prime Minister, David Cameron has announced the launch of a new, dynamic and self sustaining network of British and Indian young leaders, which will be delivered by Common Purpose.

The aim of the initiative is to expand, enrich and energise relations between India and the UK by investing in the next generation of leaders, and develop shared approaches to 21st Century political, economic and social challenges.

Now that just might have something to do with the United Nations’ Agenda For The 21st Century (Agenda 21), I suspect.  If David Cameron is able to explain what that Agenda consists of to Indian ‘leaders’, maybe he should be so kind as to do the same to his own MPs.


They in turn can talk to their constituents.  Or if they don’t, I am sure that others will happily take over the role of letting people in Britain know what their Prime Minister is actually up to.


As I understand Agenda 21, it is not a great example of traditional Conservative policies.  The key issue for Conservative MPs has been and must still remain – ‘where do David Cameron’s loyalties really lie?’  Will Wednesday’s meeting make the answer to that question any clearer?
The Tap Blog is a collective of like-minded researchers and writers who’ve joined forces to distribute information and voice opinions avoided by the world’s media.