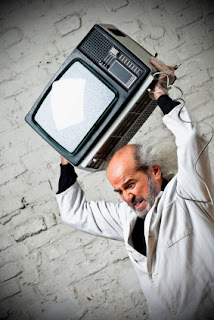 I moved house in the last two days.  It was exhausting work.  One thing I might mention.  There will be no television set here at my new abode.  I find it so much easier to be cheerful without having to hear what I know to be lies, and misinformation, pumped out daily by grinning newscasters, describing human beings being mangled and burned in various parts of the world.
You can follow the news a few steps removed on the internet or by hearing people talking in the street.  You don’t feel so guilty when you are not party to propaganda broadcasts which daily make murder and theft sound respectable.
By watching TV you are only helping them control your mind and draw you in.  Why not get rid of TV, and work entirely from the internet and books, where you choose your own input?
This piece from Global Research describes well how the channels of communication have been taken over by a single power structure, ruthlessly doing all it can to reduce the world into total subjugation….oh, and while I think of it, TV is a two way communication device, capable of sending signals both ways, same as your PC, laptop and phone.


Pop a piece of tape over your laptop’s webcam.  Get rid of your TV and radio.  The less gadgets you have, the less chance they have to both brainwash you or listen in on you.


EXTRACT FROM LINK – This is the ultimate Big Brother scenario whereby the majority of Americans and Europeans will soon have Orwellian telescreens watching their every move. (digital TVs are equipped with listening and watching equipment which sends via the digibox.  People have no idea they are buying a spying device which watches them as they watch it, and even watches them while they think it is switched off)

The institutional structures of power, whether local, national or global, are effective mechanisms through which the ruling groups of society establish and entrench their influence, build consensus among each other, brainwash and expand their control over the masses and society as a whole.

Whether that conquest is ideological or physical, the effect is the same: the conquered are oppressed and repressed.

These institutions are financed through the global banking system of collusion between the private banks and quasi-governmental central banks, who control the money supply and value of the change in your pocket, which are in fact a highly concentrated group of institutions and individuals. Never in all of human history have so few controlled so much on such a global scale, nor have so many had so little on an equally global scale.

Never before in history have the mechanisms for absolute total global control and oppression been within such close reach.


We are seeing the emergence of this ‘new society’ in which governments are increasingly imperialistic abroad and militaristic at home, as domestic police states are established under the guise of ‘homeland security’, sold on the pretense of protecting people from terrorists, but in actuality are designed to protect the powerful from the people.

Increasingly, civil rights and freedoms are being dismantled for the wider populations: countries and peoples all around the world are subjected to bombings, drone attacks from flying killer robots in the sky named “Predators”, and high-tech military equipment is designed and used to more effectively kill and conquer poor people all around the globe.

In the emerging ‘homeland security states’, technology is being used to spy on people, all internet traffic monitored, phones tapped, cameras recording not only our images, but through biometrics they are categorizing and quantifying our specific individual faces and emotional responses. We are, increasingly, seeing the emergence of a hybrid nightmarish scenario of ‘Brave New World’ meets ‘1984.’ Technology has largely facilitated the advances in these areas and has, for the first time in all of human history, made possible the notion of a truly global police state.


Yet… there is still hope.

The Technological Revolution has not only facilitated a more rapid and effective apparatus for the institutions of power to exploit in methods of oppression and control, but it has simultaneously facilitated the rapid and effective means through which more people than ever before in human history have access to and empowerment through information and communication on a truly global scale.
As a result of the Internet, the traditional institutions of power have lost their monopoly of control over information and communication.


My sentiments entirely.  Global Research needs money to keep going.  Now where’s my credit card this evening?  I’d rather send them the money for my TV licence than the BBC.  Anyday.  I buy books there frequently.  All are excellent.