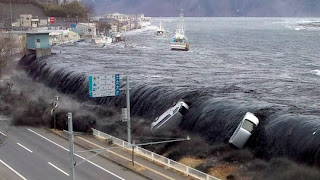 UPDATE – There never was a 9.0 Earthquake Before The Tsunami At Fukushima.

I found this via comments on Raging Bull.  It has a lots of good information for those who wonder if the recent Japanese tsunami was deliberately caused, or the December 26th 2004 Indian Ocean tsunami?


“Top-secret wartime experiments were conducted off the coast of Auckland to perfect a tidal wave bomb, declassified files reveal. An Auckland University professor seconded to the Army set off a series of underwater explosions triggering mini-tidal waves at Whangaparaoa in 1944 and 1945. Details of the tsunami bomb, known as Project Seal, are contained in 53-year-old documents released by the Ministry of Foreign Affairs and Trade.”
— From article in the New Zealand Herald (New Zealand’s leading newspaper), 9/25/1999

A declassified government report (96 MB file) http://www.wanttoknow.info/documents/project_seal.pdf featured in the newspaper article below shows that a tsunami bomb was created as a potential weapon during WWII in a program code-named Project Seal. There is little doubt that this tsunami weapon was further developed and refined over the ensuing decades, though all documents related to current developments of the project are almost certainly still classified.


Though it may seem far-fetched to imagine military involvement, these documents and reports raise serious questions about the recent tsunami in Japan and the December 26, 2004 tsunami in Indonesia.

The many layers of intense secrecy both in the government and military result in very few people being aware of the gruesome capabilities for death and destruction that have been developed over the years. Were it not for the below article in New Zealand’s leading newspaper, the public would never have known that a tsunami bomb had been created many decades ago.


No one denies that highly destructive weapons are being developed in secret by the militaries of the world. What the public doesn’t know is what these weapons are, and what they are being used for. All of this is generally classified for reasons of “national security.”

Sadly, the rubric of “national security” has all to often been used for secret political and economic gains which clearly do not benefit the public. Operation Northwoods, uncovered by ABC News in the year 2000, showed that the top Pentagon generals were willing to foment terrorism and sacrifice innocent civilians in order to provoke a war with Cuba in the early 1960s.


Credible researchers into the government’s HAARP program are convinced that this technology which manipulates our ionosphere is being used for military means and can even cause natural disasters like earthquakes. Because of this, we have to ask the hard questions.

It is unprecedented in recorded history for two major tidal waves to occur less than seven years apart. See brief descriptions of the 10 most destructive tsunamis in recorded history at this link. http://www.australiangeographic.com.au/journal/the-10-biggest-tsunamis-in-history.htm


For four intriguing theories on what might have caused the Japanese earthquake (including one which predicted the date), click here. http://www.newworldorderreport.com/News/tabid/266/ID/7344/Here-are-the-4-primary-theories-circulating-the-internet-as-to-the-cause-of-the-Japan-earthquake.aspx


Theory two seems ridiculous, but the other three are worth considering. The fourth theory is based on HAARP and has some good information about that possibility.

and learned how to make big tsunamis.  The Japanese tsunami was made by drilling nuclear weapons into the sea-bed according to Pentagon insiders.