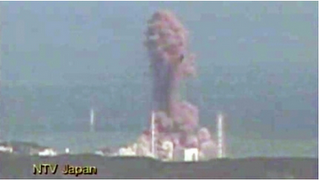 Whatever they say doesn’t stack up, day after day.  The power was cut off at the Fukushima reactor site.  Engineers claim this had nothing to do with the tsunami.  A TV report on NHK Global in Japan was beginning a report of a second nuclear plant experiencing a fire and nuclear releases in Miyagi Prefecture, when the broadcast cut, followed by a minute of black screen.  There are endless numbers of things that don’t add up, and which don’t permit the explanation that the tsunami caused all the troubles alone.

On the first day of the Fukushima disaster, Tepco reported that reactors 1, 2 and 6 were operating at the time of the quake and tsunami, and that the other 3 reactors were empty of fuel rods for periodic maintenance. 1, 2 and 6 were designed by GE, old model Mark-1.
Then reactor 3 blows and burns, and without any correction to the first report, Tepco then says 1, 2 and 3 were operating and the others were down. No. 3, which is run on plutonium-uranium MOX fuel, was built by Toshiba. (no. 5 is also a Toshiba) Toshiba has an international partnership with Westinghouse to build nuclear plants. The leak from No.3 accounted then for the reports of leaked plutonium.
Then reactor 4 building catches on fire, due to a dry cooling pool for spent rods. No..4 is built by Hitachi, which has a partnership with GE to build nuclear plants and also currently develop a laser (plasma) separation process for plutonium extraction.
The fire is so extreme (for depleted uranium) that the reactor is damaged. This suggests that reactor 4 was also internally damaged, meaning that it was operating at time of the tsunami, in an unscheduled run for either of two purposes: offline electrical generation for some reason inside Fukushima 1; or for a controlled reaction aimed at reprocessing (neutron enrichment) of spent fuel rods to increase their fissile uranium content (prior to extraction).
Next, reactors 4 and 5 are found to be generating hydrogen gas.
H gas is produced when the fission process, which releases electrons as well as neutrons, splits water molecules, H20, into hydrogen, supercharged oxygen and some hydroxyl radicals. The presence of a gas build-up indicates that these two reactors contain fuel rods, contrary to Tepco claims. This means reactors 4 and 5 had recently conducted runs or were being prepared for operations of an undetermined (and unreported) nature.
The other technical mystery is that Tepco engineers suggested that the electric power inside the plant was knocked out by something other than the tsunami. I have pointed to this possibility early on, that the quake and control disruptions could have made the control computers vulnerable to the Stuxnet virus.
The other possibility to consider is that a high-power electromagnetic event (for example a sudden energy burst from the released of ionized gases from the de-magnetized laser-plasma process) could have knocked out all electrical systems, similar to how a neutron bomb would incapacitate power system.
Very little of this information was recorded in newspaper reports, but came as nearly inadvertent admissions during the minute-by-minute televised coverage of the disaster by NHK.
The other major mystery is the one-minute blackout of NHK World News at the mention of the fire and plant shutdown at the Onagawa nuclear plant in Miyagi Prefecture.
When things don’t make sense, it means that the explanations being given for events are not the full picture.  That means that we are allowed to look outside the situation described by the media for other explanations.  The Japanese Princess Nakamaru stated that Japan is being targeted for a population reduction, and she believes that this is what is going on.

The White Dragon Society is the only other source I can find to assist with understanding what’s happening here.  I can’t embed this clip from 19th March 2011 from its spokesperson, Benjamin Fulford.  They’ve cut off my access to Youtube.  If this organisation exists it needs to find the go button ASAP.

Is it possible the Japanese nuclear plants were hit with Stuxnet at the same moment as the tsunami.  The tsunami was not typical of a naturally caused event, as the water surged in only one direction, and did not spread out its force around the Pacific.  Fulford in clip below states that it was caused by nuclear bombs planted in the sea bed and detonated simultaneously.  If that happened at the same moment as a Stuxnet computer virus attack was made on the plant, that would go some way to explaining why the operator has been unable to get any kind of solution despite several attempts.  This would be consistent with a serious attempt to reduce the human population in Japan, as feared by Princess Nakamaru.

And it would also explain why Germany, who is less willing to take part in the OWG’s wars of world domination, is closing down all her nuclear power plants in case a silmilar attack is made on her, while France and Britain, who are military stooges and who both now partake in all wars as requested, feel that their nuclear power plants are still safe.

More from Global Research on Japan’s nuclear volcano.  It’s all consistent with a deliberate attack on Japan, targeted on reducing Japan’s population, and her demand for the earth’s resources…………an act of war by any other name.

From Colin by email –

As a matter of interest re Fulford’s latest video the tsumani did reach Hawaii.A friend of mine who lives there sent me a video of it–it was very mild. Regards, Colin

One Response to “Has Another Nuclear Power Station In Japan Blown Up?”