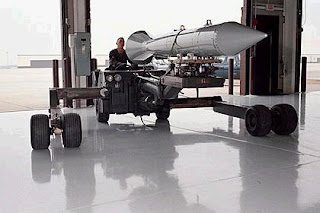 Global Research –   A war on Libya has been on the drawing board of the Pentagon for more than 20 years. Using nukes against Libya was first envisaged in 1997.

On April 14th 1986, Ronald Reagan ordered a series of bombings directed against Libya under “Operation El Dorado Canyon”, in reprisal for an alleged Libya sponsored terrorist bombing of a Berlin discotheque. The pretext was fabricated. During these air raids, which were condemned by both France and Italy, Qadhafi’s residence was bombed killing his younger daughter.

Barely acknowledged by the Western media, a planned attack on Libya using nuclear weapons, had been contemplated by the Clinton Administration in 1997, at the height of the Monica Lewinsky scandal.

The Department of Defense had developed a new generation of bunker buster tactical nuclear weapons for use in the Middle East and Central Asia:

“Military officials and leaders of America’s nuclear weapon laboratories [had] urged the US to develop a new generation of precision low-yield nuclear weapons… which could be used in conventional conflicts with third-world nations.” (Federation of American Scientists, 2001, emphasis added)

The B61-11 earth-penetrating weapon with a nuclear warhead had not been tested. It was part of the B61 series, coupled with a so-called “low yield” nuclear warhead. According to US military sources: “If used in North Korea, the radioactive fallout [of the B61-11] could drift over nearby countries such as Japan.” (B61-11 Earth-Penetrating Weapon, Globalsecurity.org). The B61-11 earth-penetrating version of the B61 was configured initially to have a “low” 10 kiloton yield, 66.6 percent of a Hiroshima bomb, for post-Cold War battlefield operations in the Middle East and Central Asia.
The Pentagon’s Plan to Nuke Libya

The B61-11 tactical nuclear weapon was slated by the Pentagon to be used in 1997 against the “Qadhafi regime”:

“Senior Pentagon officials ignited controversy last April [1997] by suggesting that the earth-penetrating [nuclear] weapon would soon be available for possible use against a suspected underground chemical factory being built by Libya at Tarhunah. This thinly-veiled threat came just eleven days after the United States signed the African Nuclear Weapons Free Zone Treaty, designed to prohibit signatories from using or threatening to use nuclear weapons against any other signatory, including Libya.” (David Muller, Penetrator N-Bombs, International Action Center, 1997)

Tarbunah has a population of more than 200,000 people, men, women and children. It is about 60 km East of Tripoli. Had this “humanitarian bomb” (with a “yield” or explosive capacity of two-thirds of a Hiroshima bomb) been launched on this “suspected” WMD facility, it would have resulted in tens of thousands of deaths, not to mention the nuclear fallout…

The man behind this diabolical project to nuke Libya was Assistant Secretary of Defense Harold Palmer Smith Junior. “Even before the B61 came on line, Libya was identified as a potential target”. (Bulletin of the Atomic Scientists – September/ October 1997, p. 27, emphasis added)

Harold Palmer Smith had been appointed by President Bill Clinton to oversee nuclear, chemical, and biological defense programs with a focus on “the reduction and maintenance of the US arsenal of nuclear weapons”. From the outset, his actual mandate, was not “reduce” but to “increase” the nuclear arsenal by promoting the development of a new generation of “harmless” mini-nukes for use in the Middle East war theater.

Harold Palmer Smith Junior
Is a Nuclear Attack on Libya Still on the Pentagon’s Drawing Board?
“The Coalition of the Willing” under US-NATO mandate is currently involved in “a humanitarian war” on Libya to “protect the lives of innocent civilians”.

Is the use of a nuclear bomb excluded under the Alliance’s R2P Responsibility to Protect Doctrine?

As revealed by William Arkin in early 2002, “The Bush administration, in a secret policy review… [had] ordered the Pentagon to draft contingency plans for the use of nuclear weapons [The 2001 Nuclear Posture Review approved by the Senate in late 2002] against at least seven countries, naming not only Russia and the “axis of evil”–Iraq, Iran, and North Korea–but also China, Libya and Syria. (See William Arkin, “Thinking the Unthinkable”, Los Angeles Times, 9 March 2002)

In addition, the U.S. Defense Department has been told to prepare for the possibility that nuclear weapons may be required in some future Arab-Israeli crisis. And, it is to develop plans for using nuclear weapons to retaliate against chemical or biological attacks, as well as “surprising military developments” of an unspecified nature. These and a host of other directives, including calls for developing bunker-busting mini-nukes and nuclear weapons that reduce collateral damage, are contained in a still-classified document called the Nuclear Posture Review (NPR), which was delivered to Congress on Jan. 8. (ibid)

The preemptive nuclear doctrine (DJNO) –endorsed by the Obama Administration– allows for the preemptive use of “mini nukes” in conventional war theaters directed against “rogue states”.While the “guidelines” do not exclude other (more deadly) categories of nukes in the US /NATO nuclear arsenal, Pentagon “scenarios” in the Middle East and North Africa are currently limited to the use of tactical nuclear weapons including the B61-11 bunker buster bomb.

The fact that Libya had been singled out by the Pentagon for a possible 1997 mini-nuke “trial run” was a significant element in the formulation of the 2001 Nuclear Posture Review (NPR).

It is worth noting that tactical B61 nuclear weapons have also been deployed by America’s NATO partners: five European “non-nuclear states”, including Belgium, The Netherlands and Italy, which are directly participating in the Libya bombing campaign, have B61 mini-nukes stockpiled and deployed under national command in their respective military bases. (Michel Chossudovsky, Europe’s Five “Undeclared Nuclear Weapons States“, February 10, 2010)

These European-based mini-nukes are earmarked for targets in the Middle East. While Libya is not mentioned, according to “NATO strike plans”, the European-based thermonuclear B61 bunker buster bombs could be launched “against targets in Russia or countries in the Middle East such as Syria and Iran” (quoted in National Resources Defense Council, Nuclear Weapons in Europe, February 2005).

In the context of the ongoing war against Libya, “all options are on the table”, including the preemptive nuclear option, as part of a “humanitarian mandate” to protect the lives of innocent civilians.
In 2007, a Secret 2003 STRATCOM Plan was revealed, which confirmed Washington’s resolve to wage preemptive nuclear attacks against Iran, Syria and Libya. While the concepts and assumptions of this document were derived from the 2001 NPR, the Plan formulated by Strategic Command headquarters (USSTRATCOM) focused concretely on issues of implementation.

The use of  nuclear weapons including the B61-11 against Libya in the course of the current military campaign, as initially envisaged by the Department of Defense in 1997 and subsequently embodied as the 2001 Nuclear Posture Review (NPR) cannot, therefore, be ruled out.