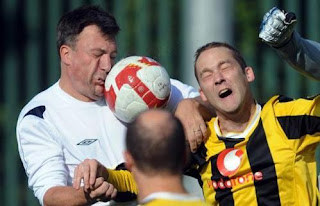 Ed Balls Straying Out Of Position Takes One In The Chops
What came first?  The chicken or the egg?

UKIP rising to 8% in the polls, or David Cameron selling out Britain?

The eurosceptic trend is clear to see and is not going away.  The Daily Express started running its quit-the-EU campaign, which has been mirrored to some extent by The Daily Mail.  The Lib Dems, the most strongly pro-EU party, are disintegrating.  UKIP are booming.  It’s bound to be having an effect on the two bigger parties.

If only their posturing is seen to become a little more sceptic than it has been, especially Labour.   They are in opposition, where parties traditionally always claim to be eurosceptic with little danger of their falsehoods being put to the test.

This from Open Europe –

Peter Oborne: Is Labour “ditching” its commitment to Europe?
Writing on his Telegraph blog on Thursday, Peter Oborne argued that Labour may be reassessing its approach to Europe. Oborne argued that “By demanding that the clear bulk of the [bailout] financing should come from the eurozone, [Ed Balls, Shadow Chancellor] has also signalled that he is ditching New Labour’s long-term and very public strategy of co-operation with Europe.” Although the Labour party is still far from anti-EU, Oborne suggested that it is more eurosceptic that at any point over the past two decades, and that this approach may give the coalition government more strength to speak out against EU policies.
Writing in Monday’s Sun, Trevor Kavanagh argued that the UK should not contribute to further eurozone bailouts. Kavanagh also suggested that Labour could be set to take a tough new line on Europe.
Of course, the reality is that both the big parties have agreed to bail out the eurozone, and they won’t be able to back out of Article 122 of the Lisbon Treaty, unless the 27 other Lisbon signatories agree.
We will see Labour pretending that this isn’t so, from hereon, just as Cameron pretended to be eurosceptic when he was in opposition.
You could be forgiven for thinking that Labour saying they’ll stop euro bail-outs, to be just another load of Balls.


Another smack on the mouth appears due to this latest ”eurosceptic” political chancer, as in the picture above…at the very least.


The Sun newspaper is yet another rag trying to climb on board the success being enjoyed by The Daily Express.  Sorry, Trevor, only EU exit will cut it with the readers these days.


Talk of adjustment to policy is just more of the same kind of waffle we’re entirely sick of.


As for Bilderberger Balls, the central bankers’ placeman who ensured Britain’s debts keep piling up year on year, next time he opens his lying mouth, the blow should be delivered to the more appropriate place.
The Tap Blog is a collective of like-minded researchers and writers who’ve joined forces to distribute information and voice opinions avoided by the world’s media.