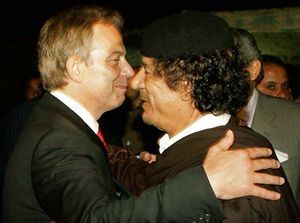 Sorry Me Old Chum.  You’re Making Too Much Money.

The objective of the war against Libya is not just its oil reserves (now estimated at 60 billion barrels), which are the greatest in Africa and whose extraction costs are among the lowest in the world, nor the natural gas reserves of which are estimated at about 1,500 billion cubic meters. In the crosshairs of “willing” of the operation “Unified Protector” there are sovereign wealth funds, capital that the Libyan state has invested abroad.

The Libyan Investment Authority (LIA) manages sovereign wealth funds estimated at about $70 billion U.S., rising to more than $150 billion if you include foreign investments of the Central Bank and other bodies. But it might be more. Even if they are lower than those of Saudi Arabia or Kuwait, Libyan sovereign wealth funds have been characterized by their rapid growth. When LIA was established in 2006, it had $40 billion at its disposal. In just five years, LIA has invested over one hundred companies in North Africa, Asia, Europe, the U.S. and South America: holding, banking, real estate, industries, oil companies and others.

In Italy, the main Libyan investments are those in UniCredit Bank (of which LIA and the Libyan Central Bank hold 7.5 percent), Finmeccanica (2 percent) and ENI (1 percent), these and other investments (including 7.5 percent of the Juventus Football Club) have a significance not as much economically (they amount to some $5.4 billion) as politically.

Libya, after Washington removed it from the blacklist of “rogue states,” has sought to carve out a space at the international level focusing on “diplomacy of sovereign wealth funds.” Once the U.S. and the EU lifted the embargo in 2004 and the big oil companies returned to the country, Tripoli was able to maintain a trade surplus of about $30 billion per year which was used largely to make foreign investments. The management of sovereign funds has however created a new mechanism of power and corruption in the hands of ministers and senior officials, which probably in part escaped the control of the Gadhafi himself: This is confirmed by the fact that, in 2009, he proposed that the 30 billion in oil revenues go “directly to the Libyan people.” This aggravated the fractures within the Libyan government.

U.S. and European ruling circles focused on these funds, so that before carrying out a military attack on Libya to get their hands on its energy wealth, they took over the Libyan sovereign wealth funds. Facilitating this operation is the representative of the Libyan Investment Authority, Mohamed Layas himself: as revealed in a cable published by WikiLeaks. On January 20 Layas informed the U.S. ambassador in Tripoli that LIA had deposited $32 billion in U.S. banks. Five weeks later, on February 28, the U.S. Treasury “froze” these accounts. According to official statements, this is “the largest sum ever blocked in the United States,” which Washington held “in trust for the future of Libya.” It will in fact serve as an injection of capital into the U.S. economy, which is more and more in debt. A few days later, the EU “froze” around 45 billion Euros of Libyan funds.

The assault on the Libyan sovereign wealth funds will have a particularly strong impact in Africa. There, the Libyan Arab African Investment Company had invested in over 25 countries, 22 of them in sub-Saharan Africa, and was planning to increase the investments over the next five years, especially in mining, manufacturing, tourism and telecommunications. The Libyan investments have been crucial in the implementation of the first telecommunications satellite Rascom (Regional African Satellite Communications Organization), which entered into orbit in August 2010, allowing African countries to begin to become independent from the U.S. and European satellite networks, with an annual savings of hundreds of millions of dollars.

Even more important were the Libyan investment in the implementation of three financial institutions launched by the African Union: the African Investment Bank, based in Tripoli, the African Monetary Fund, based in Yaoundé (Cameroon), the African Central Bank, with Based in Abuja (Nigeria). The development of these bodies would enable African countries to escape the control of the World Bank and International Monetary Fund, tools of neo-colonial domination, and would mark the end of the CFA franc, the currency that 14 former French colonies are forced to use. Freezing Libyan funds deals a strong blow to the entire project. The weapons used by “the willing” are not only those in the military action called “Unified Protector.”