Benjamin Fulford accuses Japanese Prime Minister Naoto Kan of handing over 60 million Yen to the Federal Reserve Board, following threats that HARP would be used to erupt Mt Fuji.
The cowardly Japanese Prime Minister Naoto Kan handed 60 trillion yen over to the Federal Reserve Board crime syndicate immediately after his country was attacked with HAARP and nuclear terror, according to Japanese security police sources. The extortion money was paid off following threats to use HAARP to cause Mt. Fuji to erupt. For those of you still too brainwashed to believe such a thing is possible, please take a look at the following transcript available on the US Defense Department’s home page:

Click Here
It quotes then Secretary of Defense William Cohen as publicly stating in 1997 that:
“Others are engaging even in an eco- type of terrorism whereby they can alter the climate, set off earthquakes, volcanoes remotely through the use of electromagnetic waves.”

The chief suspects in the Earthquake, Tsunami and Nuclear terror attacks against Japan are US Senator J. Rockefeller and the Bush Nazi faction of the US corporate and criminal government.
Rockefeller is a power broker behind GE, the company that manufactured the flawed reactors now spewing radiation in Fukushima. In addition, US Deputy Secretary of State Kurt Campbell, acting as an envoy for Rockefeller, met with Japanese power broker Ichiro Ozawa on March 9th, two days before the earthquake, tsunami and nuclear disaster hit Japan. During that meeting Campbell promised that if Ozawa cancelled his plans to split the ruling Democratic Party of Japan, Japanese public prosecutors would stop persecuting him, according to Japanese imperial family and Democratic Party sources. Ozawa was also promised control of zeolite deposits in Fukushima Prefecture, the sources said. Zeolite is used to clean up radioactive waste. It is also worth noting that Senator Rockefeller once wrote an introduction to a book by Ozawa.
In another sign this was a deliberate attack, experts at the University of Tokyo and well as in Italy detected HAARP signals focused on Fukushima in the hours before the earthquake and tsunami struck. The same signals have since been detected focused on Mt. Fuji where the ground water is heating up. In addition, over 5 different people have contacted this writer since the earthquake to warn that “Japan was about to sink into the ocean.”
The post continues –
To counteract this threat, the White Dragon Society has provided GPS coordinates for all worldwide HAARP facilities to the appropriate parties. We have also been contacted by agents located within US underground bases who told us the US Seal Beach underground base (with a HAARP facility in it) had seven levels with one entrance located 14,000 feet underground and another located 26,080 feet underground. There were also entrances to underground bases in Brekon Beacon in Wales, Brussels in Belgium and Berkshire, England.
Despite the cowardly reaction of the Japanese government, the Federal Reserve Board crime syndicate and their corporate subsidiary known as Washington D.C. are still headed for bankruptcy. This is a fact of nature that cannot be changed with threats and violence, no matter how extreme.
Fortunately, US President Obama and four top Generals have promised to take action against the Satanist Khazarians operating inside the US in exchange for a write off of all US external debt. The debt will, of course, be written off, but only in exchange for a promise of a swords-to-plowshares transition by the military industrial complex.
Mmmmmm…sounds a lot like wishful thinking to me.  Why would Rockefeller forgive the USA’s debt and demand a return to peace?  He loves war, and committing extortion against humanity….Japanese or anyone else.  His empire took a hundred years to create.  Why would he give it away in a day?  He won’t.


No he’ll fire his HAARP weapon again and again, joyously savoring the power it has bestowed into his hands.  No human being ever gives away total power.  It’s impossible.  There is only retribution once they lose what they had.  They will use any device and any threat to keep themselves in pole position.


As for B.Fulford why is his site a pay-for registration site?  www.benjaminfulford.net
Doesn’t he get any salary from his Japanese guardians?
Surely the information being dealt with is important enough to be made available to the world without a price tag?


It would be nice to talk to Benjamin Fulford sometime.  I sent him an email to an address posted on his blog, and left a message on his mobile, or at least a number claimed to be his mobile by a commenter.


He alleges that, according to Pentagon sources, the Japanese tsunami was caused by nuclear weapons drilled into the sea bed, and not by HAARP.

LATEST – Are the Crazies deciding to hold an alternative firework display to show the Japanese and others that they haven’t gone away?  The Philippines has announced that the volcano in Lake Taal, which last erupted in 1977, is showing signs of rapidly heating, and swelling up.  It seems like a weird coincidence that another volcano in a very near country is about to pop.  They seem to be enjoying the destruction they cause around the globe.
The picture which I borrowed from MSN in its piece about Lake Taal, strangely is not of Lake Taal.  Lake Taal volcano is an island in a lake, within an island in a lake, within an island.  See below to see what I mean.  Its eruptions are highly spectacular with the lava flowing into water, generating massive quantities of steam…which has protected locals in previous eruptions. 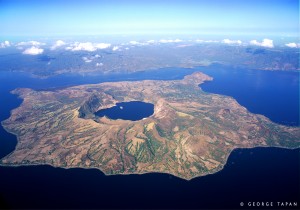 MSN –  The government on Friday warned magma was pushing toward the surface amid a dramatic rise in gas emissions, a swelling of the ground and higher temperature on the surrounding Taal lake, which it said could eventually lead to an eruption.
Visits to the 2,500-hectare (6,178-acre) crater island, a tourist major draw, were banned and local officials put up posters on surrounding communities urging them to leave.
“Phivolcs (the Philippine Institute of Volcanology and Seismology) advises the public that the main crater and (nearby trails) are strictly off-limits because of sudden hazardous steam-driven explosions may occur,” the council said.
The council said the entire volcano island was a “permanent danger zone” and should not be settled.
Taal is one of the most unstable of the country’s 22 known active volcanoes with 33 recorded eruptions, the last one in 1977.
The lake surrounding the crater prevented deaths in 1977 and during other eruptions, as the body of water protected outlying areas from the lava.
Coming back to the money side of things –
Fulford blogged this on 28th March 2011 –

“The people of the world need to urgently take action against the cabal responsible for the nuclear and tsunami attack against Japan because it is a sign they are desperate, dangerous and are speeding up their planned artificial end-times.

The next attack is almost certain to take place on US soil and is expected to be far worse than what happened to Japan, according to multiple cabal-linked sources.

The cabal is also planning to announce a new global currency in the coming weeks but it will fail because it is merely a desperate bid by them to remain in control of global finance, according to sources in the British Royal Family and at the BIS.”

Sometimes this subject gets a little hard to hold in one’s head.   Why would causing an earthquake in say California help the launch of a new world currency?  Maybe I’m still missing an important piece of the jigsaw.  If Fulford would pack up making money by charging for his blog, and help people to understand exactly what is going on, I for one, would be most grateful.  At least he’s chucked us a few crumbs, I suppose.


OTHER EVIDENCE THAT THE TSUNAMI WAS A WEAPON HERE.
The Tap Blog is a collective of like-minded researchers and writers who’ve joined forces to distribute information and voice opinions avoided by the world’s media.