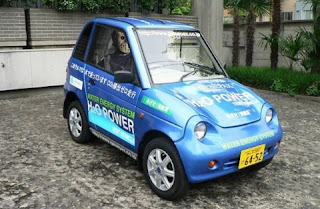 Cars fuelled entirely on water have been known about a long time.  Normally the developers are lone operators, and they invariably meet an untimely and painful death which discourages anyone else from trying such things.  This time the developers of water-fuelled zero emission cars are not private individuals working out of the back yard, but an officially approved Japanese company, Genepax which is hoping Japanese car manufacturers will mass produce the car.  Here is the current model which runs 50 miles on a liter of water and needs no batteries at all.  Can you imagine what this must be doing to the minds of the oil cartel that has run the world for the last hundred years by milking the oil monopoly?

The OWG will simply not tolerate anyone using the technologies such as generating electricity from the earth’s magnetic field, without using fossil fuels or nuclear technology, or running cars on water.  If Japan and or China have decided to break with the OWG and go for it with running cars on water, and generating electricity without fossil fuel, that would be one good reason why the tsunami was let loose, continuing with the earthquake attacks on Japanese nuclear power plants, which started last year, according to Benjamin Fulford, Canadian journalist living in Japan.

A crime scene always needs to be accompanied by a motive so it can be demonstrated that the crime was not just an unlucky accident.  Here we have found a highly plausible one.

Japanese company Genepax presents its eco-friendly car that runs on nothing but water. The car has an energy generator that extracts hydrogen from water that is poured into the car’s tank. The generator then releases electrons that produce electric power to run the car.  The electric powered car can run on any type of water (you can even use tea and soda…etc).  The car can run for an hour at about 50 miles per hour  on just a liter of water; about 2 cans of soda worth.  Genepax, the company that invented the technology, aims to collaborate with Japanese manufacturers to mass produce it.
Unlike other electric cars, the Genepax car does not require that batteries be recharged and has no emission. The water electrical generator is located in the back of the car and when water is poured it is then broken down in order to create electricity to power the car. Imagine what such a generator could do to the oil industry, the nuclear plants and the electrical grid.


That’s right.  They’ve imagined what it will mean and are taking the necessary action to crush Japan before they let these babies loose around the globe, smashing the power of the hundred year old American oil cartel.


Will the Japanese back down?  The equivalent Japanese secret societies to the OWG/NWO must be behind this venture.  Why would they back down from a course of action, which they must have given great thought to?  The attacks on Japan could be seen as just the same as those being carried out on Libya, Iraq and Afghanistan.  They are all part of the  attempt to stop the world from moving on from the Empire built on oil and electricity.


No wonder the attacks on Japanese independence are growing in intensity and regularity.  The OWG is rushing to try to stop the world moving on to a new era free from their assured exploitation, before it is too late.


See earlier posts on Benjamin Fulford, the Japanese tsunami and the Fukushima nuclear plant attack.  Use the search box.  Or click this blog post from yesterday.


Fulford says that the OWG is keen to bring on WW3 as they think they can win it now, and secure the world for another few hundred years of domination, or more.  They intend to do this by reducing the earth’s population.  Japan is becoming a key target for its attentions, having the technical ability to undercut the OWG’s traditional power base.


I don’t blame the Japanese trying to opt out of OWG programs one bit, which include having her population halved, and having to import fuels she doesn’t even need at three times the price they need to be.  Most people on the planet, I imagine, would prefer not to be executed by a cabal of crazies whose power went to their heads decades ago.    But even the occasional tsunami, earthquake and other catastrophe must be worth the price of freedom, when half of you are doomed anyway.

Nuclear-power operators and manufacturers from around the world are concerned that the latest accident in Japan will result in a backlash against the industry. The companies were beginning to go through a surge in new orders, benefiting from the drive for energy with lower greenhouse-gas emissions and rising power demand in emerging economies.
If it’s possible to make power from water without fossil or nuclear hazard, I would imagine that
would suit Japan’s needs very well, not to mention the rest of the world.  Go for it, Tokyo.  Maybe
Japan will still be the first to break out of the stranglehold of the energy cartels.  Just imagine if it


could all be done without massive debts as well.  Now we’re talking!

Is it the refusal of Japan to privatise her banks that’s also the trouble, where the biggest savings pool in the world resides….

This possibility brings Heizo Takenaka back into the story, the finance minister who claims Japan was threatened with an earthquake device…

Heizo Takenaka’s involvement in attempts to have Japan’s vast savings pool privatised are mentioned in the article below.  He was appointed by Koizumi to press ahead with the privatisation of the Japan Post Bank, which holds $3 trillion savings, an eye-watering target for the OWG.

Japan Post Bank is the largest holder of personal savings in the world, making it the world’s largest credit engine. Most money today originates as bank loans, and deposits are the magic pool from which this credit-money is generated. Japan Post is not only the world’s largest depository bank but its largest publicly-owned bank. By 2007, it was also the largest employer in Japan, and the holder of one-fifth of the national debt in the form of government bonds. As noted by Joe Weisenthal, writing in Business Insider in February 2010:


Because Japan’s enormous public debt is largely held by its own citizens, the country doesn’t have to worry about foreign investors losing confidence.


If there’s going to be a run on government debt, it will have to be the result of its own citizens not wanting to fund it anymore. And since many Japanese fund the government via accounts held at the Japan Post Bank — which in turn buys government debt — that institution would be the conduit for a shift to occur.


That could explain why Japan Post has been the battleground of warring political factions for over a decade. The Japanese Postal Savings System dates back to 1875; but in 2001, Japan Post was formed as an independent public corporation, the first step in privatizing it and selling it off to investors. When newly-elected Prime Minister Junichiro Koizumi tried to push through the restructuring, however, he met with fierce resistance. In 2004, Koizumi shuffled his Cabinet, appointed reform-minded people as new ministers, and created a new position for Postal Privatization Minister, appointing Heizo Takenaka to the post. In March 2006, Anthony Rowley wrote in Bloomberg:


By privatizing Japan Post, [Koizumi] aims to break the stranglehold that politicians and bureaucrats have long exercised over the allocation of financial resources in Japan and to inject fresh competition into the country’s financial services industry. His plan also will create a potentially mouthwatering target for domestic and international investors: Japan Post’s savings bank and insurance arms boast combined assets of more than ¥380 trillion ($3.2 trillion) . . .


A $3 trillion asset pool is mouthwatering indeed. In a 2007 reorganization, the postal savings division was separated from the post office’s other arms, turning Japan Post into ………….

If water-fuelled cars are not enough to bother the world’s bankers with their dependence on oil revenues coming under threat, then the determination of Japan not to sell off, i.e. lose control of her vast savings,  but remain independent, would be upsetting to a Wall St desperate to fund greater and greater US Government i.e. military spending.  They no doubt see the money as theirs as Japan’s thirty year long export boom was nurtured by the US.  It’s just that Japan doesn’t see herself as a subject of the OWG, and that no doubt is where the tsunami and earthquake-causing conflict is coming from.

Sorry, Tap, it is nothing but an investment scam. takes more energy to get the hydrogen out of water than you get from the hydrogen!

many will say that.  but it’s not the case.   one scientist at MTI breaks water H2O into HHO using sunlight.  Water breaks apart with a catalyst easily enough.  The single Hydrogen atom (not H2) burns with phenomeneal energy.


he said there is more energy to be derived from burning 30 grams of hydrogen than hundreds of thousands of gallons of gasoline.

Please note that in one kilogram of water, there are 111 grams of hydrogen.  300 kilograms of water have more power potential than hundreds of thousands of gallons of gasoline.

Extract –
in one kilogram of pure water (water is one oxygen and two hydrogen atoms connected by covalent bonds), the mass of hydrogen atoms amounts to just slightly more than 111 grams, or 0.111 kg.

One Response to “Is This What’s Rocking The Rockefellers?”