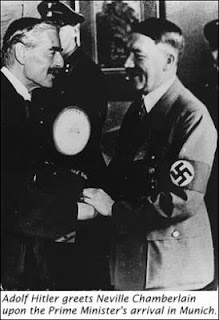 Hitler didn’t want a war with Britain.  He believed an alliance between Germany and the British Empire would halt the spread of communism.  But he underestimated the power of the bankers to control events.   Britain started the war, not Germany.

I just read Who Makes Our Money?  by F.J.Irsigler.  It was sent to me by a Tap Blog reader called Erwin from Yorkshire in January, and it’s taken til now to get around to reading it.

In England things look quite promising.  They have a Prime Minister who is not a banker’s man.  The trouble is she is the leader of a party composed entirely of bankers’ men.  As their leader she will have to do what they want and not what she would like to do.  The assertion seems preposterous but here is the evidence to support it –


As reported by George Knupffer (op.eit. pp 92/94) on the 14th January 1964 and then again on 22nd December 1964, Captain henry Kerby, MP, introduced a Motion in the House of Commons demanding that the usurped right of issuing money be restored to Her Majesty The Queen, and that is future, all monies required by the Government of Great Britain should be issued debt-free for the benefit of British taxpayers.


As not a single Member of the House of Commons, not a single Conservative, Socialist or Liberal supported this motion, it was not even discussed or reported by the Press.  Maybe some members would have like to support it but shuddered at the thought of what had happened to Hitler and others who had dared to oppose the bankers.


I tried to get in touch with Captain Henry Kerby but was told he had died of heart failure.  We all have to die sooner or later of heart failure, but men who oppose the bankers have a tendency to die rather sooner than later.


The book covers the role of Hitler at length.  He issued his own money to get Germany’s economy surging before the war, which I never knew.  He offered Britain a non-aggression pact to stop the spread of communism, but as the spread of Communism is the long term plan of the Bankers, Britain was prevented from accepting this offer.  The Poles were offered easy negotiating terms by Hitler to allow a single road to reconnect the two halves of a Germany divided by the Versailles Treaty.  But the bankers were determined to get WW2 going, and the Poles were persuaded not to even negotiate at all with Hitler, imagining themselves protected by a guarantee from Britain and France – only made to assist the commencement of a war.

Churchill was saved from bankruptcy in the 1930s by the bankers and was in their pockets.  The British politicians who wanted to keep peace with Germany like Lord Erroll, were assassinated, or moved to one side, just as Mrs Thatcher was, IDS and any others who have made attempts to stop the imposition of communism by the One World Government.

Soviet Russia was financed and supported throughout by the Bankers.  They see the suppression of private property and democracy as the only way their power to issue money and continue our enslavement can survive.  A worldwide communist totalitarian state is their aim.  They control all the media as well as the political parties.  Only on the internet can the message of the true history of the world be told.

This book is an essential read for anyone who wants to understand.  Try to find a copy.  The book deals at length with the Nuremberg Trials alleging that the statements of the accused were obtained under torture, and that there were no gas chambers at the various camps.

The Bankers control the flow of information, and want wars, as that is the way they increase their wealth and concentrate their power.  The latest British Prime Minister, Cameron, is another banker’s man rushing to create war in Libya to pl;ease his masters, as did Blair in Iraq.  On all occasions the wars are declared against countries governed by men who dare to issue their own money, and who, as a result of daring to challenge the power of the bankers, become history’s bogeymen forever more.  Those who comply with the Rothschild’s banking requirements, can commit mass murder with little or no effect to their reputations.

Amazon possesses a single copy of the book –  here

Incidentally, the world central banks have pumped $5 trillion dollars into the economy in the last three and a half years, 8% of the world economy –
Telegraph

18 Responses to “Hitler, Saddam and Gaddafi All Issued Their Own Money”