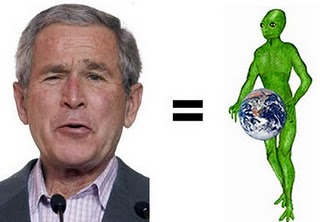 Hey!  We thought this Reptilian thing was just a joke!

Here is the youtube embed that someone removed from yesterday’s blogpost ”Kate Middleton, are you sure you know who you are marrying?”, without my permission or knowledge.

I thought the youtube clip of George Bush blinking one eye at a time was a joke, but apparently someone powerful is highly sensitive about this, someone powerful enough, that is, to remove things from blogposts unannounced.


I have been blogging since June 2006.  A ”theft” of a blogged youtube embed has never happened before in all that time.

The intervention doesn’t stop there. The embed key on all youtube clips is also missing as I browse today.  So no more embeds allowed on The Tap, it seems, at least for today.


I must have hit on an extremely sensitive spot.


I am trying to keep an open mind and see if it (my mind) is capable of understanding the reptilian theory of the OWG, as espoused by David Icke.  I was doing this with an open, though sceptical mind, and with a sense of humour.  As I was trying to do this, someone was obviously getting worried.


Who is that someone? And if the reptilian thing is all a big joke, what are they so worried about?


I am forced to the conclusion that there might be more to the reptilian theory than I thought.   As I cannot embed, here’s the URL of the video they removed, in case the link above is disconnected.  The clip doesn’t show much to worry George Bush unduly, I wouldn’t have thought, although this copy and others have been watched by millions of people worldwide.

MY OWN SPOOKY BLOG OBSERVATION


Let alone whether George Bush is a shape-shifting reptile or not, There have been strange things I’ve observed myself while blogging over the years.  One thing out of the ordinary I’ve noticed about blogging is that readers come in groups.  If there is one reader browsing, the chances of another starting to browse are ten times higher than if there isn’t another already browsing.  I see this phenomenon on Sitemeter every day.  According to all rational explanation this cannot be.  Yet somehow the presence of other people reading a blog at the same time that they are, is accessible to a reader to the point of influencing his/her behaviour, even though they can’t possibly know consciously that anyone else is there.


This is a typical thing that Icke would say of, that energy is sensed by people subconsciously, and that what we perceive as reality is what we’ve been taught to perceive by school and the media, which is a tiny fraction of the true forces that shape our environment.  I am still watching and listening to Icke, who I rejected out of hand in the past.  I am merely curious as to whether he has stumbled on anything important which would expand my understanding of what is happening in the world.


If there is a genetically different breed of human in control of the OWG, or another species, that would explain why they tolerate so many wars, so much killing and evil deeds against the rest of humanity.

3 Responses to “George Bush Doesn’t Like Being Called ”Reptilian”. Why?”