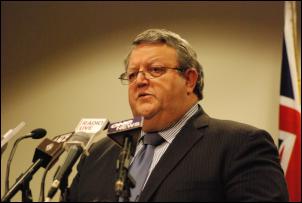 Brownlee, Gauleiter of Christchurch, New Zealand.  Who gave permission for democracy to end in New Zealand?

You might have heard of Agenda 21 of the United Nations.  And you might not have done.  I link to details of what it is bringing to the world under Tapestry’s Politics in the left hand column.  It includes the worldwide abolition of national sovereignty, democracy and of private property.  It all sounds like science fiction.  What sane person could think up such things?  People reading what Agenda 21 entails tend to call the writer a TFHW – Tin Foil Hat Wearer.  They just can’t believe what the United Nations, the world’s effective and future government, intends, so they shoot the messenger.

That said, it is instructive to find pockets or samples, as it were, where the influence of Agenda 21 is already visible.  Sceptics who doubt the sincerity of the One World Government’s determination to take away the rights of humanity, can, in such situations, see Agenda 21’s inevitable outcomes actually happening in the flesh.

Such a case is Christchurch, the city in New Zealand, recently struck by a second earthquake in less than a year.  Hundreds died.  Hundreds more lost their homes and businesses.  That’s bad enough.  But even worse have been the political consequences.

The NZ government has decided to cancel all democratic processes in Christchurch, as well as private property rights.  Originally this was done until 2012, which shocked locals who might have accepted that a brief period of totalitarian state control might be justified, but not a whole year and more.  But this week, the real intention of the New Zealand government began to become clearer when the period of time for outright state control of the City, the cancellation of democracy and private property rights, was extended until 2016.

This article from Scoop It Independent News explains –

Last year, Canterbury Earthquake Recovery Minister Gerry Brownlee was endowed with god-like powers to over-ride existing law by the legislation passed in response to the September quake. At the time, there was widespread concern about the unilateral powers central government had assumed, and the length of time ( until 2012!) they would be allowed to wield them, virtually unopposed. Already, Canterbury residents had good reason to feel sensitive about such matters, given the abolition of its democratically elected Environment Canterbury and its replacement by a panel of central government appointees.
Now, those earthquake recovery powers are being expanded further in every direction and for longer – with Brownlee being empowered to rule Canterbury by decree until 2016. Interestingly, the virtually unlimited powers of land confiscation by officialdom will go hand in hand with limited rights of compensation for the citizens affected. More on that later. After the February 22 quake, the option existed to merely amend last year’s already draconian earthquake recovery legislation. Instead, central government chose to pass a new law that will – among other things – install a new panel of central government appointees to run the process. As the recently issued background papers to the new legislation put it, a new legislative unbrella seemed appropriate : “Due to the significant amount of new material to be included in the Act” it would mean that it resembled new legislation rather than an amended Act; “
The new material? Instead of expiring in 2012, Brownlee’s powers to over-ride existing laws has been kicked out for five years. The powers of confiscation, as No Right Turn has already pointed out, include being able to confiscate and demolish a home or perfectly sound business premises for a newcommercial development :
The new legislation will set out powers for CERA to acquire land or an interest in land (including fixtures such as buildings), compulsorily if necessary and to demolish buildings, rebuild or change the use of an area….Acquisition of land powers are considered to be necessary in order to facilitate the recovery of Christchurch. It may be necessary for CERA to demolish a building (that is otherwise sound), or rebuild on a site, or otherwise take control of land and use it in a new way (such as to form part of a new commercial centre, or a park, or for remediation).
The key phrase there being “such as to form part of a new commercial centre.” So if a developer wants a particular building bowled or land seized or re-zoned to build a mall or a supermarket parking lot, they will be able to make a case to the new, central government appointed Canterbury Earthquake Recovery Authority (CERA) that their commercial enterprise “ will facilitate the recovery of Christchurch” – and if they don’t get satisfaction there, the developer can ask Brownlee to simply over-ride CERA’s decision.
Compensation ? Not so much : –
To my mind this is not a temporary situation but a permanent situation.  Not only that.  By 2016 this could have become the norm throughout the ”free world”.  The Christchurch earthquake is being used as the first place to impose United Nations’ Agenda 21.  Elsewhere they will use wars and civil unrest as the excuse to end democracy.
This is not simply a local issue, for New Zealand.  Here is the beginning of a worldwide takeover by state power, as ordained by United Nations’Agenda 21 and Habitat 2.  It might be better to fight and die for freedom at the first onset of this sinister development, than sit meekly and experience further shocking developments.  Here we see blatant and deliberate removal of the rights of humanity to liberty, property rights and the pursuit of happiness, and the power of the state no longer limited by democratic accountability.   In Christchurch such things have simply been cancelled at the stroke of a bureaucratic pen.

And that is simply what is coming everywhere, as soon as the political circumstances lend themselves.  The international agreements are all in place.  Christchurch and New Zealand are only the first to experience what will soon be the norm, unless they get up and strangle this at birth.

Many people in New Zealand believe the Christchurch earthquake was caused deliberately by HAARP.   If that is true and I will not go into the arguments here, it would suggest an even more sinister event is taking place in Christchurch, with the earthquake triggered deliberately and the political response all planned beforehand.  But the political events alone should be enough to alert anyone that something wrong is happening, which needs addressing.   As I say, here we see the way the United Nations is preparing to go in enslaving the world.  A very dark age is about to descend on humanity where geological events, wars and civil unrest will be used as the excuse to terminate democracy, national sovereignty and private property rights.  The retail end of totalitarianism is starting in Christchurch New Zealand, with Gauleiter Brownlee hoping the plebs will remain docile.  Any attempts to bring back democracy will be brutally repressed, you can be sure, and misrepresented in the media, which is entirely under worldwide State control.

See also – http://norightturn.blogspot.com/2011/03/canterbury-enabling-act-ii.html
which explains that the enabling laws were passed in response to the first earthquake which took place in September.