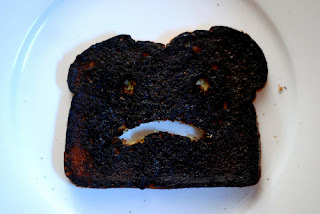 No coalition.  No majority.  Collapse of regime.  General Election.   In a word, Toast.

MOST LIBERAL DEMOCRATS ARE AIMING FOR AN ALLIANCE WITH LABOUR: David Cameron should be under no illusions as to who he’s sharing his political bed with. Clegg is not the Liberal Democrat party. A few Orange Bookers including Clegg, Laws, Alexander and Browne are not representative although they’ve seized control of their party. Cable is closer to the true ideological centre of the Liberal Democrats and his Guardian interview, on Saturday, in which heopenly discussed building an anti-Tory progressive majority is the political project that most Liberal Democrats are working towards. We are in alliance with a party that largely wants our defeat.


This is on Conservative home under http://conservativehome.blogs.com/thetorydiary/2011/04/david-cameron-should-prepare-for-an-early-general-election.html

The only way for the right-minded vote to survive the end of the coalition between C and LD, and the creation of a new coalition between Labour and LD, is to form an immediate electoral arrangement with UKIP, who have risen recently to 8%.  That means dumping David Cameron.  Even then UKIP plus Conservative would be starting at 40% against Labour plus Lib Dem starting from 50%.

Yet a revolution in British politics on the right would trigger a whole new possibility as to the direction the country could go.  A party standing to get out of the EU would see a surge in support.  Farage should be in conflab with Conservative backbenchers right now.

If AV is rejected, and the coalition disintegrates,  Cameron and Hague are finished, their Lib Dem love-bombing strategy in tatters.  Remember that the law is being changed to facilitate joint emblems on ballot papers.  That will be UKIP/Conservative, not LDC as originally intended.

We read that the Av campaign has just got nasty. Some tell us the Coalition is under stress owing to the new tough rows going on. I don’t think so.
I do not believe Mr Huhne, after the referendum, will pursue the matter through the courts. When didn’t elections throw up contested claims and dubious facts? Have the Lib Dems never put out a leaflet which others thought misleading at best? How much does Mr Huhne think AV elections would cost?
I do not believe Dr Cable will resign because he thinks the government ought to let in more migrants than Mr Cameron will allow. I am still trying to work out why he thinks the Lib Dems are stopping unpopular policies within government, when he was the architect of the higher tuition fees policy which so far has aroused more protest than anything else. Nor do I think Mr Clegg really believes our present system of voting is a right wing plot, when it has been accepted by most people for many decades, and has elected socialist as well as Conservative governments.
The Lib Dems have to stick with the Coalition, whatever the result on 5 May. They after all are the believers in Coalition politics, so they have to go the extra mile to show us how it’s done in the national interest. They signed up to a 5 year Parliament and a 5 year programme, and voted through a piece of legislation to reinforce the 5 year run. Surely they would not tear up such a promise so soon after making it? How could they be trusted in any future coalition talks if that is the way they behaved this time round? What would they say to the electors about such a U turn, when the deal was a referendum on AV, not a guaranteed victory for AV.

The one factor that could stop the majors wanting to engineer an election would be UKIP going to 8%. The Conservatives would be toast. The OWG likes Cameron as he’s fronting Libya. They will stop Clegg from pulling the rug. The antics are all media games