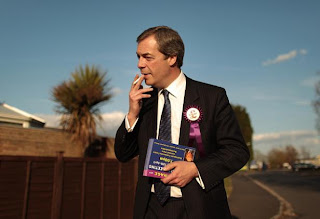 Farage’s momentum is building.  Only one more breakthrough and a snowball effect could roll away the Conservative dominance of right-minded politics in Britain permanently.

Cameron suggested before he was elected that he would be vaguely interested in resisting the EU with various cast-iron guarantees, winks and nudges.  He knew exactly which buttons to press to ensure right-minded people voted for him and to get rid of Gordon Brown.  Nearer the time of the election, he seemed to pull many of his punches and almost ease the path for Nick Clegg, who was beamed up onto the Starship Enterprise from nowhere, by means of a new political device known as The Cleggasm.

As soon as the election result was decided, and Labour were finally beaten, a different unrecognisable David Cameron appeared before our eyes.  It was not the same one we had heard talking before the election at all.  The David Cameron we had all supported and voted for in the hope that he might keep even one of his pre-election eurosceptic promises, turned out to be the total opposite of what he had suggested he would be.  He has simply betrayed Britain in every possible way that he can, as fast as he can, and as brazenly as he can.  He’s been the protagonist of the Libyan war, calling for another war of world domination, and trying to tell everyone it is something to do with being a humanitarian mission.

To be honest, I don’t even listen or read a word he says, just as I wouldn’t countenance any more of my life being wasted by hearing Brown and Blair.  To any right-minded person Cameron and Hague are history.  We gave them just one more chance to show us they possessed something more than the greed and cowardice of politicians that we have sickeningly got used to, but now see that we were and are totally wasting our time.  They are EU and OWG lackeys through to the core.  Conservative is just a flag of convenience for their acts of piracy against our national independence.

Backbench Conservative MPs can see what is going on, and they too feel highly aggrieved at their being sold down the river, and the pro-EU and pro-OWG agenda of the Lib Dems being given priority.  But, apart from the occasional individual effort from the likes of Douglas Carswell, the rest, who should have been swearing blue murder in unison at every step Cameron has taken, have meekly signed up and become EU-lobby and OWG fodder.

Right-minded voters have had enough.  In desperation they are turning away from the Coalition in droves.  Support for the Lib Dem, over 20% at election time, is now at 10%.  UKIP which was held back at 4% in May 2010 is now sporting 8%.  But the situation is moving ahead and fast.  Since January UKIP have risen from 5% to 8%, a growth rate of no less that 1% a month.  The trend could yet gather strength, and snowball.

The Lib Dems are more than likely to be the fourth largest party within months.

As Cameron’s EU sell-out progresses, and if AV is passed into law, the measure which was intended to ease the path of the Coalition at the next election, could become the device that instead brings it to a premature end.  A vote for UKIP would no longer be a wasted vote, and right-minded Conservatives could find themselves stampeding into the UKIP corner, taking UKIP up from approaching 10% to more like 20% and Cameron’s Conservatives crashing to 20%.  The only possible coalition of the right that might win an election from there, would not be Lib Dems and Cameroons, but John Redwoods and Farages.  That of course would be what right-minded voters actually want.

Cameron would have to be jettisoned from the leadership mid-term like Thatcher, and pay the price for his inept handling of the situation.  Labour might be delighted to see this fracturing of the right, but they too, post-AV, could yet see a fall-away in their current consolidated vote of the left.  The Greens would erode Miliband’s bloc as could maybe other fringe parties of the left.

Angus and Reid’s March Poll Tells The Story.
UKIP on 8% nationally.  Unthinkable a year ago.  Now at a critical jump-off point.
Once UKIP overtake the Lib Dems,  and pass 10%, the next target will be to replace the Conservative Party. 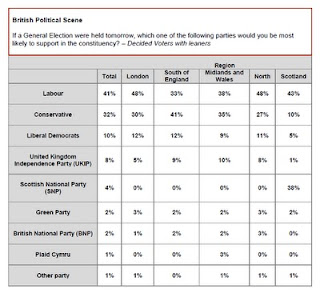 My own instinct was to vote against AV, but to be honest with you, I’m not bothered much any more.  Cameron has demonstrated beyond doubt the bankruptcy of the old system, as well as his own.  Like Blair, he will collect huge pay-off for doing the business of the military industrial complex and ensuring Britain is locked into yet more wars as the OWG attempts to dominate the world,  and while Britain’s national sovereignty is dismantled brick by brick.  The sooner he is allowed to rush off and cash in his winnings the better.

AV will be the moment he can finally be shown the door, and politics in Britain surge forward to a new chapter.  The 1922 will have to act and get rid of Cameron or see every single Conservative seat burned to the ground.  They should have moved earlier, but every month they leave it, the less turf they will have left to defend.  AV, if it gets through, combined with the treachery of David Cameron will become the reason for the termination of the once great Conservative Party, unless something is done soon.  Only once his head has been firmly placed on the guillotine will any revival be possible, for either party or country.