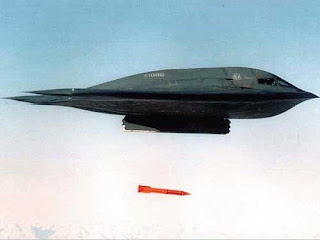 One of the best writers at Global Research is Professor Michael Chossudovsky.  He has been quietly pointing out that America has developed a nuclear bombing capability, with the intention that these be used not in ICBMs as visualised in The Cold War, but as battlefield weapons delivered by planes, and guided to target by GPS.

The countries which these weapons can be used against are listed – Iraq, Iran, North Korea, China, Russia, Syria and Libya.

The capability is, this week, being brought up to operational level with test bombing runs being flown in the Nevada Desert, since the Libyan no fly zone was ordained.

Adding it all up, Professor Chossudovsky presents compelling evidence that the USA is ready to go to nuclear war in Libya (On humanitarian grounds remember!) – and behind that threat has to be born in mind that the other countries mentioned on the nuclear bombing list are also being scheduled for a taste of nuke, if they should provide just cause – I know – yet more humanitarian intervention!

Benjamin Fulford says the OWG is ready to fight WW3.  They are so far ahead of all other countries in the world that they believe they can win a military confrontation involving any other opposition.  By adding tactical nuclear weapons to their arsenal, combined with HAARP, America could well be in a position of current supremacy.

But what if Russia and China decide to make a go of it.  They still have ICBMs ready to fire from silos or from submarines, targeting US cities.  Does the US military believe they can shoot all these down using HAARP?  The problem is that the OWG runs the world on the basis of threat.  There might soon come a time when the threats have to be carried out, if they are to remain credible.  And then what?   A nuclear World War Three I guess, with the peoples of the world having no idea what’s being fought for, by who and what the result will be.

What will the BBC say?  ”NATO used nuclear bombs on Libya this morning as part of her humanitarian mission in the country?”  Give over.  The media deception at least will be over, if not the wars.  No one surely will continue believing the nonsense being served up on all the wars any longer.

Or will they find Osama Bin Laden alive and well, riding on a camel, planning to train terrorists to blow up the World Trade Center or the Pentagon?  That one’s gone a bit quiet of late, hasn’t it.  The excuses for obliterating the planet are fast running out, as more and more observers realise that the excuses given for all the wars are false.

The crazies don’t seem to care.  Their deception efforts are wearing a bit thin, but their kiloton bombs are well able to inflict a massive blow for humanity anywhere on the planet.  And by all accounts, they just can’t wait.