The half life of depleted uranium is 4.5 billion years.  It permanently gets into the food and ground water supply and cannot be cleaned up.  In the first Iraq war, 350 tons of it were used.  In Yugoslavia, every round fired was tipped with depleted uranium.  Afghanistan is permantly poisoned,  and soon so too will Libya be permanently poisoned.

200,000 gulf way veterans are permanetly disabled. 10,000 have died.  Many were poisoned after hostilities were ended.

Depleted uranium is an illegal weapon.

Cameron is sending thousands of British soldiers to fight in a war in Libya where some will die from bombs and bullets, but far far more will become permanently disabled by poisons.  And far more will die that way.

The madness must be stopped.

Cameron is in any case merely a stooge for One World Government as was Blair.  All the real decisions are taken elsewhere.  This short extract explains where power resides –

In Tragedy and Hope: A History of the World in Our Time (1966), Dr. Carroll Quigley revealed the key role played in global finance by the BIS behind the scenes. Dr. Quigley was Professor of History at , where he was President Bill Clinton’s mentor. He was also an insider, groomed by the powerful clique he called “the international bankers.” His credibility is heightened by the fact that he actually espoused their goals. Quigley wrote:
I know of the operations of this network because I have studied it for twenty years and was permitted for two years, in the early 1960’s, to examine its papers and secret records. I have no aversion to it or to most of its aims and have, for much of my life, been close to it and to many of its instruments… In general my chief difference of opinion is that it wishes to remain unknown, and I believe its role in history is significant enough to be known…
The powers of financial capitalism had another far-reaching aim, nothing less than to create a world system of financial control in private hands able to dominate the political system of each country and the economy of the world as a whole. This system was to be controlled in a feudalist fashion by the central banks of the world acting in concert, by secret agreements arrived at in frequent private meetings and conferences. The apex of the system was to be the Bank for International Settlements in , a private bank owned and controlled by the world’s central banks which were themselves private corporations.[4]
The key to their success, said Quigley, was that the international bankers would control and manipulate the money system of a nation while letting it appear to be controlled by the government.
He might have added, ”….and carry out wars and make them appear to be under the control of national governments”.  Cameron is no more in control of the wars Britain is fighting than Blair was.  We are simply One World Government stooges, grabbing the resources of the world on behalf of big business, and poisoning the lands we invade, rendering them uninhabitable.  The idea that we are spreading democracy is laughable.

Hugo Chavez has it right.  From WSJ –

”More death, more war. They are the masters of war,” Mr. Chavez said. “What irresponsibility. And behind that is the hand of the United States and its European allies.”
“They want to seize Libya’s oil. The lives of Libya’s people don’t matter to them at all,” Mr. Chavez said. “It is deplorable that once again the warmongering policy of the Yankee empire and its allies is being imposed, and it is deplorable that the United Nations lends itself to supporting war, infringing on its fundamental principles instead of urgently forming a commission to go to Libya.”
French fighter jets fired the first shots at Gadhafi’s troops Saturday, and U.S. and British warships launched a missile attack on Libya’s air defenses.
“We know what’s going to happen: bombs, bombs, war, more suffering for the people, more death,” Mr. Chavez said in a televised speech in Caracas.

Details on how much Depleted Uranium is being used in Libya and how it will cause deaths and illness far and wide. 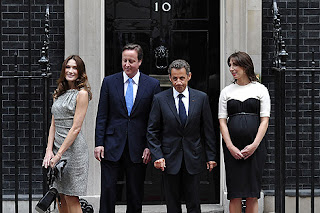 These are temporary staff filling a media role, pretending they are the focus of power.  As Carroll Quigley says, the real decisions are taken elsewhere.  They’re all in the pay of the One World Government without any principles other than what they can get out of the procedure.  They have nothing to say about the shocking abuses of human rights that are all part of suppressing democracy, where that suits their paymasters.  And they make war-making, murder and environmental destruction sound respectable, on behalf of the world’s real masters.
The Tap Blog is a collective of like-minded researchers and writers who’ve joined forces to distribute information and voice opinions avoided by the world’s media.

6 Responses to “Why Is David Cameron Promoting A War Which Will Poison Another Country In Perpetuity?”