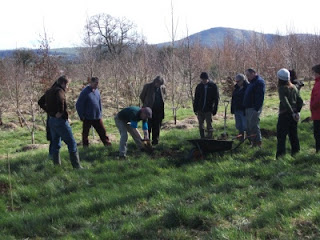 Planting and grafting apple trees this week at Karuna in the Shropshire Hills, England.

This is the story of how alcohol was the first fuel that ran automobiles in the USA.  Rockefeller paid Congress to outlaw not the drinking of alcohol but the production of alcohol.  It was called Prohibition.

Prohibition of alcohol made it essential for cars to run on gasoline, which, prior to that, had been a waste product of the chemical industry, as it was too volatile to be useful for anything else and was being poured into rivers at night to get rid of it.

The first Model T Fords had a choke which you rotated.  This changed over the air intake from alcohol to gasoline which needs more air.

Alcohol today would cost $1 a gallon to produce on the average American or European farm, using wheat or apples.  That would compete quite well with gasoline which today costs $3-4 in the US or $8-9 in Europe.  The monopolists are overpricing themselves, this simple sum would appear to suggest.

The ideal people to try this idea out might be the same who are planting many different apple tree varieties in the Shropshire Hills in England, near my home this month, pictured above.  It’s not illegal.  Why not knock up a few pots of applejack for summer consumption – by your cars, that is?  It would make a nice tempting smell round the country lanes to boot!  An apple a day keeps the fuel bills at bay, could be the slogan.  Heating could be next, and not a war needed anywhere, except with the local council maybe who might find some daft reason to stop such a simple example of private enterprise from improving the environment!

Hello Tap,
I have to say you seem to have captured the essence of truth within this whimsical satirical piece. The ending is spot on. For the council are indeed pulling strings to prevent people from learning how to lead a more responsible, sustainable life .Proof of this is provided below…..
Recently Karuna Permaculture project was refused entry into the Shropshire hills Area of outstanding natural beauty (A.O.N.B),“sustainable business directory”.
Failure to include a nationally recognised, genuine business and sustainable community project with a focus on helping Britain feed itself and help others to learn how to do it, surely demonstrates a lack of concern for the wellbeing of the local and broader population as well as refusal to offer support to new business in the area.
The Shropshire hills AONB manager sent Karuna the following e-mail.
I am sorry for the delay in our replying to you on this, which has been due
to a need to consult with Shropshire Council, who as our host authority
deal with all our contractual matters. The Council’s Legal Services
Department has said that

“In view of the current outstanding enforcement issues relating to the site
and the potential for further litigation being commenced by the Council it
is considered inappropriate for the Council or any of its affiliates to
embark upon a course of conduct that could potentially conflict with or be
construed as compromising the Council’s subsequent ability to take further
enforcement action that it considers appropriate. On that basis the
request is declined.”
Karuna replied……
“Dear Phil,
We are shocked by this refusal. As are a number of people we have spoken to about it.

This kind of exclusion from the AONB and the council is unacceptable behaviour as Karuna is an official national recognised, sustainable, business operation.
It demonstrates that there is lack of understanding for the community, business or the environment.
It is very sad.
For me, having moved to the area with a desire to improve all the above and made a reasonable amount of success of it,(Increase in Bio diversity, tourism/local food and tree production/Educational resource/community support/wildlife/ it goes on).
I find this closed mindedness…. very depressing.
Why you needed to consult with anyone in the council for such a simple request to Karuna being entered in directory boggles my mind.

In any case the excuse for the refusal is ridiculous as absolutely any other persons that happen to be listed could at any time come to have legal issues with the council.
I consider this a serious matter, an act of prejudice, we  feel we are being penalised for our eco-beliefs and way of life.”
Mr Tap as you have so rightly pointed out it seems the council will try and find any daft way to stop simple private enterprise from improving the environment.
The massive ‘Morris company’  based in  Shrewsbury,(Shrops) happen to be  the country’s largest independent  privately owned Oil lubricants supplier. They own and have much influence on the town and council, (some say they own the town),they build, run and manage over 200 properties,(including huge nursing homes) along with many other varied enterprises including wait for it…….. SUPERMARKETS.
They describe themselves as a ‘dynamic family company’. They have a history of 140 years of investment.
Perhaps there is a link with ‘Morris Co’, perhaps they’re paranoid because Karuna is Organic and has a focus on low oil inputs. Of course they don’t want to see dwindling numbers of customers to the Supermarkets they have developed. Sounds a little ridiculous paranoia I know, but greed is a bottomless pit, see how the supermarkets have taken hold in every small town now.
To top it all some influential neighbouring landowners to Karuna happen to have the sir name ‘Morris’, members of the ‘dynamic family’ perhaps!
Karuna is beyond politics, it promotes ways of living a more caring existence, that’s all.
So how come so much time and public money has been wasted on trying to prevent the projects development? It just doesn’t add up ,does it?
REPLY –
The Morris’ are at least contactable, which is more than can be said about multinational oil businesses. I don’t know if the family has members who are interested in environmental sustainability, but it is possible.  You get all sorts in big families.  Try calling Tim Morris, the current family head of the business.  He might have a positive interest in what you are doing.
The Tap Blog is a collective of like-minded researchers and writers who’ve joined forces to distribute information and voice opinions avoided by the world’s media.