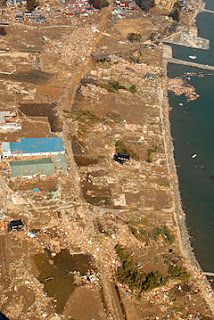 Sendai’s coastal areas were wiped out.

The estimates of the Sendai earthquake’s magnitude made it the strongest known earthquake to hit Japan, and one of the the five strongest earthquakes in the world overall since modern record-keeping began in 1900.[31][41][42][43]
Wikileaks –  let alone the tsunami.

Japanese Prime Minister Naoto Kan said that “in the 65 years after the end of World War II, this is the toughest and the most difficult crisis for Japan.”[44] The earthquake moved Honshu 2.4 m (7.9 ft) east and shifted the Earth on its axis by almost 10 cm (3.9 in),[45] an expected change for an earthquake of that magnitude.[4


The city of Sendai has a population of 1 million people.  Its coastal areas were obliterated.  It seems inevitable that the loss of life will be far in excess of the few thousands admitted to by the media so far.  One mayor of one relatively small town has admitted he has 10,000 missing people.  The numbers lost could well be in the hundreds of thousands.   The media is trying to stop people panicking, selling off their shares and bringing commodity prices down, I guess.


And that’s before any effects from nuclear contamination are brought into the equation.  The news bulletins that all  escaping material is contained seem overly optimistic.


This is a major catastrophe in an advanced economy which simply cannot be reported.  Has the One World Government blown up its own economic recovery programme by causing one earthquake too many?  They probably thought a minor ripple would be enough to stop Tokyo pursuing an independent line.  They might have blown a fuse this time, though.  The scale of the tragedy is simply too big to be containable by media silence.

One Response to “The Media Downplays Japan’s Loss”