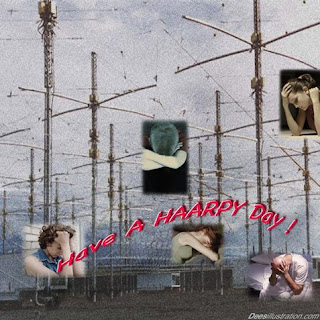 HAARP – can be used to direct the weather, cause earthquakes and influence mood
Mike Smithson on Political Betting wrote last night –  The fact that this happened in what for Japan was an earth-quake of a size not seen before…
It makes you think.  Queensland has floods and weather not seen before only a few weeks ago.  That happened to Melbourne the year before.  Pakistan had the deluge of the century.  Brazil…

Just too many things are happening.  Chile’s earthquake.  Christchurch in New Zealand.


We know from Channel 4 News that the jet stream, which normally sits over the Equator, has divided into two separate currents, one north and one south, and that this has never happened before.  There must be some reason for all these extreme events happening.  There has to be a rational explanation.


There are those who believe the US military’s HAARP weapon is capable of creating extreme weather events and earthquakes.  Are the ”crazies” of the One World Government finally going insane, like in the closing section of a James Bond movie, with the set blown sky high and all the evil characters sent to blazes?


They have wars going on in more and more countries as each year goes by.  They can topple dictators like Mubarak with the click of a mouse in Washington, and move market prices in any direction they desire regardless of the real levels of demand and supply.   I imagine such power would go to anybody’s head.


We know about Agenda 21, the United Nations 1992 ”Sustainable Development” Programme, and the plan to collectivise the part of humanity that still remains alive.

The Crazies have since boomed the world’s economies over the last twenty years with debt and quantitative easing.  Are they now seeking to bring on the bust, using their HAARP earthquake and weather machine to trigger it?  After that they can put into action all the powers lying dormant from the Patriot Acts and the Homeland Security instruments all legislated for under Agenda 21.


Do they want to get on with their plans of throwing the world into concentration camps, and start sorting out who they want to keep alive and who is to die, the separation of children from their families, the abolition of private property and the abolition of nations?  This must be a good moment to do all that, as most of the world is unaware of what they are planning and preparing.   First they need to create chaos and mass terror.  Then it will be easy for them to implement their ”socialist and environmental” programmes.


In another two years the majority might have cottoned on, and start doing things to stop them.  Right now they could probably get away with it all, as no one has a clue ( or at least only those who have studied and followed the progress of the One World Government for years like Dr Stan Monteith – see Tapestry’s Politics).


If so let’s hope there is a James Bond on their tail, ready to blow up their tower of evil and bring the world back from the brink.  At this moment the Crazies look like they are winning every scene  .  Surely someone within the US military knows what is going on and is trying to bring them down.  Let’s pray for them to get on and stop the Crazies from destroying the world that we all know and love.  What’s the next scene, a tidal surge across the North Sea to swamp London, and a hurricane flooding Manhattan, with both financial centres in chaos at the same moment.  Ideal.


(The British security services are totally penetrated and Britain’s military is in the process of being degraded in case that did throw up a James Bond attempt at stopping the One World programme.  Come on, chaps.  Best foot forward.)


There just can’t be all these extreme events week after week by chance.


Fear is bound to kick in before long, and send the world’s economy crashing.  That no doubt is exactly the result they want to bring about.  Nice thoughts to start the day.  I’m sorry.  But someone has to say it.  Evil is winning the game, hands down.  Good has to awaken.  The best we can hope for is a Haarpy Day now, not a Happy One.  The battle for life and civilization is on.

To the chaos erupting all over the World as the result of Obama’s allowing the use of these catastrophic HAARP “weather weapons” it can only be described as being “biblical” in the apocalyptic destruction it is causing, and which includes:

Ø The greatest heat wave and destructive fires Russia has experienced in over 1,000 years.

Ø The greatest flooding Central Europe has experienced in over 800 years.

Ø Flooding in Pakistan so epic the United Nations has named this mega disaster as being worse than the 2004 tsunami that shattered the Indian Ocean basin.

Ø Flooding so catastrophic in China the death toll is soaring into the thousands.

Ø A heat wave so terrible in Japan it has caused its hospitals to be flooded with over 21,000 heatstroke victims.

Ø A heat wave of unprecedented proportions that has gripped the eastern and southern parts of the United States this summer and shows no signs of abating.

Ø Temperatures so low in the western United States that farmers in California are now reporting their fruits and vegetables are being destroyed.

Ø A catastrophic drought hitting Africa that has put over 10 million people in immediate danger of starvation death.

Ø A catastrophic winter occurring in South America that has killed in Bolivia alone between 3-6 million fish and thousands of cattle in Brazil, and hundreds of people.
EXTRACT  2–

As we had previously reported on in our August 3rd report titled “Russia Burns, China Drowns: US To Blame?” Russian research scientist Dr. Andrey Areshev has joined the ranks of International scientists and experts stating their belief that the extreme weather chaos currently battering our Planet is being caused by the Tesla technology based weapons systems directed from Alaska ’s High Frequency Active Auroral Research Program, otherwise known as HAARP.

Dear Tap,
Sorry to email you again so soon, but as you know I am one of the many (probably) whom Google will not allow to
contribute directly on your site.
When this earthquake happened in Japan yesterday, being a somewhat cynical person by nature, I almost immediately
wondered if this terrible event could have been provoked in any way by human endeavor.  I asked my husband that very question
because he is quite scientifically minded and he replied, “well, not unless they were testing i.e. exploding nuclear bombs
beneath the water and the earths’ surface!”
To my mind that not beyond the realms of possibility. The fact that Japan has the misfortune to be built on a well known
earthquake fault line, would make it even easier for a manmade earthquake to be provoked.
This event which has fast followed several others, which you mention in your blog post, is just too much.  Unless “mother nature”
has gone completely mad and I doubt that very much.  Then I’m inclined to believe that other much darker forces are in control
of these strange and awful happenings.  The fact that these events are happening to questionable (in the view of the NWO) countries makes it all the more suspect.
Gillian
I am not sure why these events are happening, if deliberately caused.  Crazy seems as good a word as any, but what if, in this case, the nuclear plant was targeted deliberately?  Are these all depopulation events?  It will be a while before the picture becomes clear.
Those who are blocked from sending comments to The Tap should email or use the Proxy Web.  Key ”Proxy Web” on Google.
The Tap Blog is a collective of like-minded researchers and writers who’ve joined forces to distribute information and voice opinions avoided by the world’s media.