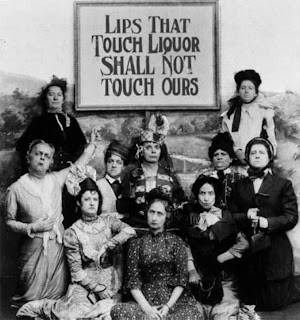 These ladies’ brains were not addled by watching daily soap opera episodes.
Just look at their faces.  They knew what they were about.  No one was going to stand in their way.  Before the days of television and radio, the message of right and wrong would flow from the pulpit, or from the hearts of a dedicated campaigner who could persuade others to join the cause.
If people would stand together now and campaign like this against the perceived evils of our day, it could still be highly effective.  People are too busy to give political campaigning a look-in, or too subdued by the power of the media to realise that they too could have a voice.  Even now though, if people stood together and decided that there was one thing so evil that they would no longer cooperate, the pressures could be brought to bear powerfully from the grass roots.  The thing that’s missing is a moral code, a reference point, a yardstick.  All are so desperate to appear cool, or be politically correct, and not to stand out.  The day that people assemble together in groups as determined as this one, saying ”who cares what others think”, and publicly nail their colours to the mast is the day that change will come.
The status quo survives as long as the governed permit it to do so.  Those that tried to stand against the Bush brigade, and The Order individually are gunned down – Kennedy, Lennon, Fortuyn, for example, or blown up – Neave, Mountbatten, or died in crashes – Kaczynski, Haider, Diana.  But a formidable army of millions of determined women, like these, would not be so easy to eliminate.  But right now, their minds are all kept busy by the media, so they don’t ever get to the point of rebelling.  Assassination is only effective because the massed ranks are not following behind.  Our subjugation is achieved by Neighbours, East Enders, by the separation of households, and the disconnection of peoples’ lives from the community where they live, and the confusion of a myriad of political messages designed to prevent people from realising that there are simple truths of right and wrong – by the joys of 24 hour so-called ”news”, in fact propaganda.
The MSM is the instrument of our enslavement.   Freedom will come when people stop listening and watching, and throw the TV out of the house.  We’ve got the internet which is much more fun, so why not.  Come on, girls.  No sex for flunkies that watch TV from now on, OK.  It’s surfers only or enforced celibacy.  It worked in 1919 against the main instrument of social suppression at that time.  Why not today?
This was no doubt a piece of managed dissent against the temperance movement from the breweries.  You can imagine it hanging on the pub wall, convincing drinkers they were still making the right choice!  Just as you will find TV and newspaper columnists misrepresenting the views of bloggers today.
The Tap Blog is a collective of like-minded researchers and writers who’ve joined forces to distribute information and voice opinions avoided by the world’s media.