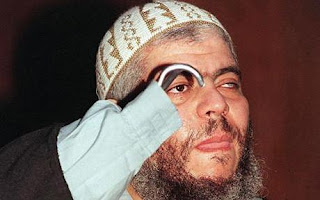 cartoon terrorists like this guy are created for your consumption.
Abu Hamza.  On MI5’s payroll.

The mainstream media is the most obvious in its inherent bias and manipulation. The mainstream media is owned directly by large multinational corporations, and through their boards of directors are connected with a plethora of other major global corporations and elite interests. An example of these connections can be seen through the board of Time Warner.
Time Warner owns Time Magazine, HBO, Warner Bros., and CNN, among many others. The board of directors includes individuals past or presently affiliated with: the Council on Foreign Relations, the IMF, the Rockefeller Brothers Fund, Warburg Pincus, Phillip Morris, and AMR Corporation, among many others.
Two of the most “esteemed” sources of news in the U.S. are the New York Times (referred to as “the paper of record”) and the Washington Post. The New York Times has on its board people who are past or presently affiliated with: Schering-Plough International (pharmaceuticals), the John D. and Catherine T. MacArthur Foundation, Chevron Corporation, Wesco Financial Corporation, Kohlberg & Company, The Charles Schwab Corporation, eBay Inc., Xerox, IBM, Ford Motor Company, Eli Lilly & Company, among others. Hardly a bastion of impartiality.

And the same could be said for

the Washington Post, which has on its board: Lee Bollinger, the President of Columbia University and Chairman of the Federal Reserve Bank of New York; Warren Buffett, billionaire financial investor, Chairman and CEO of Berkshire Hathaway; and individuals associated with (past or presently): the Coca-Cola Company, New York University, Conservation International, the Council on Foreign Relations, Xerox, Catalyst, Johnson & Johnson, Target Corporation, RAND Corporation, General Motors, and the Business Council, among others.
It is also important to address how the mainstream media is intertwined, often covertly and secretly, with the government. Carl Bernstein, one of the two Washington Post reporters who covered the Watergate scandal, revealed that there were over 400 American journalists who had “secretly carried out assignments for the Central Intelligence Agency.” Interestingly, “the use of journalists has been among the most productive means of intelligence–gathering employed by the CIA.” Among organizations which cooperated with the CIA were the “American Broadcasting Company, the National Broadcasting Company, the Associated Press, United Press International, Reuters, Hearst Newspapers, Scripps–Howard, Newsweek magazine, the Mutual Broadcasting System, the Miami Herald and the old Saturday Evening Post and New York Herald-Tribune.”

By far the most valuable of these associations, according to CIA officials, have been with the New York Times, CBS and Time Inc. The CIA even ran a training program “to teach its agents to be journalists,” who were “then placed in major news organizations with help from management.”

These types of relationships have continued in the decades since, although perhaps more covertly and quietly than before. For example, it was revealed in 2000 that during the NATO bombing of Kosovo, “several officers from the US Army’s 4th Psychological Operations (PSYOPS) Group at Ft. Bragg worked in the news division at CNN’s Atlanta headquarters.” This same Army Psyop outfit had “planted stories in the U.S. media supporting the Reagan Administration’s Central America policies,” which was described by the Miami Herald as a “vast psychological warfare operation of the kind the military conducts to influence a population in enemy territory.” These Army PSYOP officers also worked at National Public Radio (NPR) at the same time. The US military has, in fact, had a strong relationship with CNN.
Global Research


Things are no doubt pretty similar in Britain.
The Tap Blog is a collective of like-minded researchers and writers who’ve joined forces to distribute information and voice opinions avoided by the world’s media.