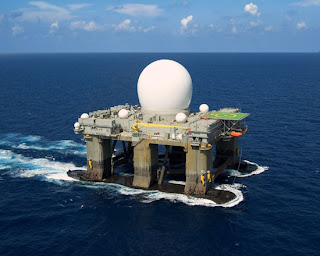 Sea Based HAARP.  Where was the USS Ronald Reagan Carrier strike group on the morning of March 11th 2011?
More information is appearing on the net about the chances that Japan’s tsunami was deliberately triggered.  If it was, it could have been set off by this little baby, which gets towed around inside carrier strike groups, usually for its ability to shoot down missiles.  It can also be used to emit a wave of 2.5 hz the wavelength that triggers earthquakes.  HAARP was being emitted at this wavelength for two days continuously before and during the Japanese earthquake erupted.

EXTRACT FROM LINK – The broadcast was most likely being transmitted from a floating HAARP system like the floating Sea-Based X-Band Radar platform that can be moved anywhere in the Pacific or Atlantic ocean under the protection of a carrier strike group – like the USS Ronald Regan.  Where was the USS Ronald Reagan on the morning of March 11, 2011?  According to a Stars & Stripes March 9, 2011 report – Reagan carrier group steams toward South Korea to join exercise.
See full article here.

SEOUL — The Ronald Reagan Carrier Strike Group is in the western Pacific on its way to participate in the huge military exercise now under way in and around South Korea.

Details on exactly what the carrier strike group will do as part of the Key Resolve/Foal Eagle exercise were not immediately available from U.S. Navy officials Wednesday.

“The carrier strike group will conduct exercises and port visits to enhance maritime partnerships and promote peace and stability in the region,” according to a Navy news release.


If that’s the case, then how come the fact that earthquake specialists have been warning of peak hazard as regards earthquakes, and no one’s been warning anyone in the media?   Beaching of whales and fish indicate coming earthquakes, and the passage of the moon coming closer to the earth.  Both of these events have preceded recent earthquakes as the clip below indicates.  There is a lot more known about when earthquakes occur than is being communicated to the earth’s population.  Why would that be?

Listen to this earthquake geologist who sees the patterns, and who successfully predicted the 1998 San Francisco strike four days before it happened.  He fears a strike is coming to North America next.  If all this stuff is known, why is kept from the public, which would enable many more to save themselves. 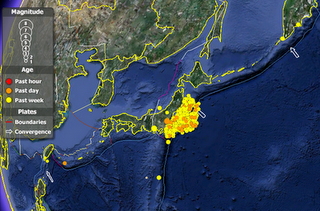 FROM COMMENTS –
Look how concentrated the cluster of the quake is
http://dasschwerstegewicht.blogspot.com/2011/03/amazing-image-showing-japan-quake.html

Is the tight superclustering of powerful earthquakes like this a regular occurence on this scale i.e. duration, number, strength on richter scale?

The HAARP hypothesis is interesting but solar flare and huge moon must also be relevant to any analysis. The most this could be is HAARP trying to contribute to a pre-existing unstable state to maximise the plate-tectonic tension clearing impact of the huge moon (and coincidental huge solar flare impact).

What do you think of the idea NW coast of North America is next? 19th-26th March.

But let’s not worry about the latest theories about the cause of the earthquake.  Where’s all the nuclear fall-out going?
The video tells you – Southern California is already getting readings from radiation monitors.  Readings of 234 microrads have been recorded.  It’s heading towards many other states via cloudtrack.  Why is the US government failing to warn its citizens?


Japan’s tsunami was caused by a nuclear bomb….

4 Responses to “Did This Little Baby Trigger Japan’s Monster Tsunami?”