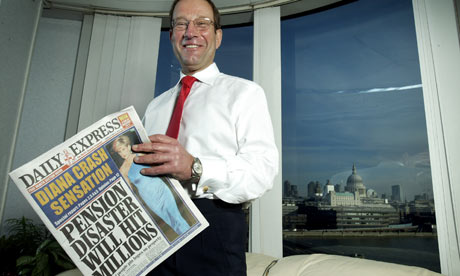 Express Owner, Richard Desmond has run OWG stories before, like the assassination of Princess Diana.  His motto is ”Nothing is difficult for the strong.”

I am sure the Daily Express are seeing a revival in readership since launching their anti-EU campaign.  I rarely picked up The Express in the past, but now invariably do.  I am sure I’m not the only one.


I maybe seeing things, but the boost being given to Richard Desmond’s Express appears to be encouraging the Daily Mail to get a bit more eurosceptic to boot.  Today’s example is described by Open Europe –


The Mail’s City Editor Alex Brummer lists ten ways to help British business, one of which would be to “Divorce Britain from European employment law”. Brummer argues that rulings on maternity/paternity leave and the European Working Time Directive have raised the cost of employment and made management more difficult.


Both titles have to go further.  Until they explain to the British public how the One World Government has manipulated wars into being, and terrorist acts against our own people, and is attempting to take over the world by sinking us all in unpayable debts, they are only telling a mere fraction of the OWG story.  The EU is merely part of the political theatre used to persuade people they live in a democracy.  You need to look beyond the EU to understand world events fully.


Richard Desmond has been the first to tackle the issues at all.   Now the Mail is following the path he’s set, as before, he should be the first to go further.  There’s a story to be told – literally the story of the century.  This has to be Mr Desmond’s greatest opportunity, to reveal the secrets that have been kept from the world for a hundred years.  People have to be told, or their path to totalitarian servitude is assured.  Only if people know who is really pulling the strings can they start to fight back.  The Brotherhood Of Darkness which brought us Blair and now Cameron has to be exposed.


As for Mr Desmond’s viewpoint?


His motto Forti Nihil Difficile – “Nothing is difficult for the

strong” – (it was Disraeli’s motto) is used by the Northern &


It won’t be lack of courage that