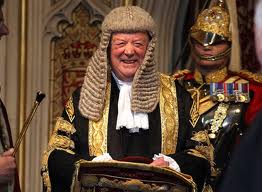 What’s that sword for, lad?

It takes some working out.  Why would a Conservative government want to shorten prison sentences and stop people being locked up who are a danger to society?

The point is that Ken Clarke is a Conservative in name only.  He is a dedicated Europhile and a Bilderberger, in short a supporter of the One World Empire.  He is nothing less than a totalitarian, who is happy for democracy to be the sham that it has become across the developed world.

Election are rigged.  The media is controlled.  Political leaders are carefully inserted into place.

The only force within society that the totalitarians fear is the military.  Only the army has the potential power to stop them from getting total control.

The army is ground down fighting long drawn out wars, where no end is required by the government.  The objective is to win and hold territory where either oil is located, as in Iraq, or coal as in Kosovo, or a pipeline is needed as in Afghanistan to bypass Russia.  The other objective to keep the armed forces busy, and to grind down their morale to the point that they don’t present any threat to the subjugation of their nations into One World Empire Supranational structures.

What the totalitarians need to keep the army back is a second paramilitary force with no loyalty to country, or to long regimental traditions, but merely to pay-off.  What better material for such a brutish concept than the large numbers of violent criminals who should be in jail.  Only these such would be capable of being placed into such an outfit, and be willing to attack or arrest regular troops, were they ever to be so foolish as to challenge the current holders of political power.

Why else are Britain’s armed forces being reduced to the point of ineffectiveness, and placed under foreign command?  The SAS, for example, which functions from a philosophy of independent action, is especially dangerous to the OWE.  Why else would they be placed under French command?  There their potential to think about what is happening to their own country, and to wonder if it might be able to be stopped and reversed, is greatly reduced.

This is where Ken Clarke’s army of disloyal thugs would also be most useful.  The OWE needs forces that they can rely on not to rebel, to whom mere payoff is sufficient reward.  The massed ranks of criminals who resent regular society are the perfect candidates.

The army should act now, and seize power in Britain.  They should throw out all the current traitors like Cameron, Clarke and Hague,  and throw out the power of EU judges to impose their priorities.  They should arrest and charge Blair, Brown, Portillo and the other traitors with treason, those who allowed acts of false flag terrorism to be committed against British citizens on the 7th July 2004.

Only the army is left.  The only thing that can save Britain from being sucked into the OWE as a subjugated nation is the army.  I would be in favour of a coup d’état.   If the army doesn’t get in there first, Clarke’s thugs will soon be ready to disarm the regular loyal army, and have the few commanders who could save Britain assassinated or imprisoned.  Then we will finally be in the bag, with no line of escape.  That’s the Bilderbergers’ gameplan.  It’s time the Army made a plan of its own, and stopped acting as the stooges of supranational power who intends the demise of our own country.

Ignore the politicians who are all part of the Bilderberger One World game, and get in there.  Once the ship has been cleared of all the rats,  the original British constitution can be reimplemented.  The loyalty of Britain’s security services like MI5 and MI6 must be reclaimed, and its powers used to protect the state, no longer in sending our young men to be ground down in never-ending wars, until our country can be handed over fully to criminally-minded totalitarians, who are driven only by greed, and a lust for yet more power.

Ken Clarke is building loyalty with Britain’s criminals.  He knows he will be needing them soon enough.  This is exactly what Hitler did in Germany in the 1930s with the SA.  The German army could have stopped him, but chose not to.  That is the lesson when governments start favouring criminals.  Catastrophic  results are inevitable.  Act, soldier, while you can, and stop them.

One Response to “Why Does Ken Clarke Want The Thugs Out Of Jail?”