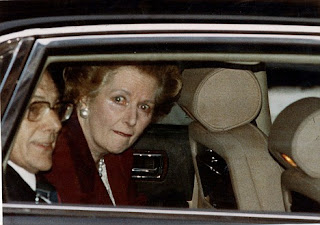 The moment the corporatists got rid of her.  They believed in handing power up the ladder to Brussels and beyond, where they more easily avoid democratic accountability.  Mrs T believed in the people.

As David Cameron thrashes around trying to find the words to get across what exactly he means by the phrase ‘The Big Society”, he could usefully go back to Margaret Thatcher’s original words, written by her for the magazine Woman’s Own in October 1987.


And, you know, there is no such thing as society. There are individual men and women, and there are families. And no government can do anything except through people, and people must look to themselves first. It’s our duty to look after ourselves and then, also to look after our neighbour. People have got the entitlements too much in mind, without the obligations. There’s no such thing as entitlement, unless someone has first met an obligation.

There is a living tapestry of men and women, and the beauty of that tapestry and the quality of our lives will depend on how much each of us is prepared to take responsibility for ourselves. And each of us, by our own efforts, is prepared to turn round and help those less fortunate.


Instead of differentiating himself from Mrs Thatcher’s ‘There is no such thing as society” by saying ‘there is such a thing as society.  It’s just not the same thing as the State”, which didn’t exactly clarify his message, he could usefully use Mrs Thatcher’s well chosen follow on piece.   He’s set his stall out to be better than Mrs Thatcher, and missed by a mile.


Let’s hear it again for Mrs T’s tapestry, the positive part of her message.  It’s a lot more understandable, the idea that people matter and should be the focus, and that we are not all part of some huge sociological machine, designed in a laboratory, called The Big Society, so advanced that no one is quite sure what it is.


That’s where she got it right.  She realised that what happens on the small scale is more powerful than big, grandiose interventions from on high.  Cameron, just like Blair, wants it all to be big deal.  It isn’t all big deal.  And furthermore, big deal won’t work.  Human life is all about people making decisions that will improve things as we go along, or make things worse. As Thatcher and her tapestry were saying, it’s the little things that count, and it was that part of her message which was truly revolutionary.


Grandstanding by the corporatists who like the idea of power in their own hands, and a world in which the ”elite” thinks it is better than ordinary people, the world of David Cameron, Blair and Big Money, is a waste of time.  It always leads on to disaster, and the suffering of millions of people, as decisions are taken in favour of the powerful, and against the interests of  everyone else.


A political leader who believes in people, and not in mechanistic power, has become a rare thing.  It was wonderful to live through a time when people mattered.  It could be a long time before we see that happening again.


And no, Thatcher’s tapestry is not where the inspiration for my blog name Tapestry came from!  Although I’m happy to encourage an association between her thoughts on people and my blogging ID.  I don’t think there’ll be many bloggers called ”Big Society” coming along.  It’s highly forgettable and uninspiring as a rallying cry, just more evidence that Cameron’s lost with no idea where to go next, as he sells out his country to powerful vested interests, that he hopes will reward him one day for his treachery.