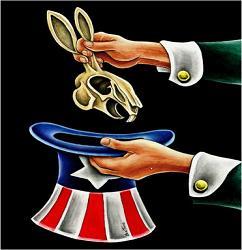 The announcement by the Fed of its second tranche of QE in November 2010 sounded like an error of judgement at the time.  Interest rates were low, and falling, and mortgages were becoming more affordable.  That was looking hopeful for the housing market’s recovery, and in turn for an eventual recovery of employment.  The unexpected second QE announcement sent interest rates scurrying higher, mortgages costs up and the nascent housing market recovery back into reverse.  Stocks and commodity prices have boomed, with negative consequences for growth in the real economy.  High energy costs kill industrial and business investment, and unemployment languishes with no recovery in sight.

This piece from Global Research describes it all well, and offers a suggestion as to what will come next.  The rise in interest rates will finally cap the stock market’s and CRB’s (commodities) advance, and ram both into reverse.  The result could be economic instability on the grand scale, and a loss of credibility for American leadership of the world’s economy.
That’s before any mention of the incredible size of the world’s derivatives markets which dwarf the world’s real economy.  That massive problem could take a century to unwind, as the the size of the world’s debts become increasingly apparent.  The attempt to surge asset prices by the Fed was, of course, an attempt to shore up the collapse of the derivatives market, as that is their greatest fear.  As that edifice collapses, which it finally will, the secret networks that have taken over government and ruined the privileged positions that they had achieved over the last century, will be exposed to the full fury of public opinion.
It is impossible to calculate how such an event would pan out, but the chances of Ron Paul in The White House, and the Rockefellers finally humbled after a century of world control could be one outcome.  Such events are likely to be unparallelled in their economic severity.

Here is the preamble to the article –

“If once [the people] become inattentive to the public affairs, you and I, and Congress and Assemblies, Judges and Governors, shall all become wolves. It seems to be the law of our general nature, in spite of individual exceptions.” Thomas Jefferson (1743-1826), 3rd US President
“If the American people ever allow private banks to control the issuance of their currency, first by inflation and then by deflation, the banks and corporations that will grow up around them will deprive the people of all their property until their children will wake up homeless on the continent their fathers conquered.” Thomas Jefferson (1743-1826), 3rd US President
[Corruption in high places would follow as] “all wealth is aggregated in a few hands and the Republic is destroyed.” Abraham Lincoln (1809-1865), American 16th US President (1861-65)
“When plunder becomes a way of life for a group of men living together in society, they create for themselves, in the course of time, a legal system that authorizes it and a moral code that glorifies it.” Frederic Bastiat (1801-1850), French economist
“Inflation made here in the United States is very, very low.” Ben Bernanke, Fed Chairman, Thursday, February 10, 2011

Global Research
The Nov. 3rd announcement by The Fed translated into an important loss of confidence in its ability to design and pursue an appropriate monetary policy, and was immediately decried by other central banks and by America’s biggest creditor, China, as a blatant attempt to generate and export inflation.
Bond prices began immediately to fall and bond yields to rise. It seems that bondholders began selling longer-term Treasuries at a faster rate than the Fed could buy them.
Chairman Ben Bernanke and his board seem to have forgotten that the United States is now a debtor nation, [ http://www.investopedia.com/terms/d/debtor_nation.asp ] not a creditor nation. A creditor nation could get away with an outspoken policy of creating inflation—but not a debtor nation. In 2010 alone, the U.S. registered another half a trillion-dollar trade deficit with the rest of the world. This has to be financed, and it is done with foreign borrowings. To a large extent, foreign creditors now decide the final outcome of American monetary policy.
The 10-year Treasury yield, [ http://www.treasury.gov/resource-center/data-chart-center/interest-rates/Pages/TextView.aspx?data=yieldYear&year=2010 ] which hit a low at 2.40 percent in October 2010, was at 2.63 percent the day before the Fed’s announcement on November 2, 2010. As it turned out, it closed at 3.64 on Friday February 11, after hitting a high of 3.75 percent on February 8. The same is true of the 30-year Treasury yield that hit a high of 4.76 percent on February 8, thus approaching the dangerous threshold of 4.90 percent. The latter stood at 3.93 percent on Nov. 2, 2010.
Obviously, the Fed’s ultra loose monetary policy has backfired. Its intended policy of printing money in excess of what the economy demands has resulted in raising real long-term interest rates, not lowering them. Indeed, with long-term nominal rates on the rise while inflation will take many months to surface, the immediate effect of the Fed’s November announcement was to raise real long-term Treasury rates, not to lower them.
Mortgage rates are also on the rise, threatening to postpone the long anticipated recovery in the housing market.
—It is certainly possible that we are entering a period when the already observed rise in real interest rates can derail the stock market rally that has been in force since early March 2009. Later on, however, a slowdown in the economy coupled with fiscal compressions can be expected to push long-term rates down again. Such a roller-coaster path for interest rates is not very helpful.
The current Fed board seems to believe that the Fed is more than a central bank, that it is a sort of a government unto itself that can both control monetary conditions and solve the structural problems in the real economy at the same time, irrespective of what the rest of the world thinks. This would seem to be most unrealistic. Perhaps a dose of humility would be salutary at this time, before irreparable damage is done.
Rodrigue Tremblay [ http://www.thenewamericanempire.com/author.htm ] is professor emeritus of economics at the University of Montreal and can be reached atrodrigue.tremblay@yahoo.com. He is the author of the book “The Code for Global Ethics” at: http://www.TheCodeForGlobalEthics.com/
The Tap Blog is a collective of like-minded researchers and writers who’ve joined forces to distribute information and voice opinions avoided by the world’s media.