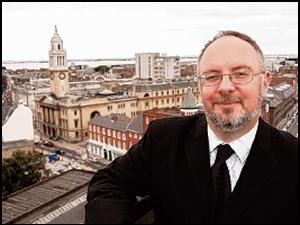 
Champagne flowed at the £240-a-head black-tie dinner in a ballroom of the sumptuously restored Savoy hotel in London…The host, Kim Ryley, the £180,000-a-year head of Shropshire council, and president of Solace, the society of chief executives, said in his address that councils were “the most efficient part of the public sector”. Five days later his council said it would shut nine schools, on top of forecasts of 1,300 job losses.” –Sunday Times (£)

But not his own job apparently.


If local government’s the most efficient part of government, God help the rest.  Efficient in what way, precisely?  Finding nice jobs for a clubby network? and keeping in with Common Purpose, possibly?

Here is a 2009 Report about his former job as Chief of Hull City Council where he was the highest paid Council Chief in the land.

TOP-EARNING city council chief executive Kim Ryley is set to leave the authority.
An official announcement confirming his decision to leave the Guildhall after nearly five years in Hull is expected to be made this week.
It is believed he is set to become the first full-time chief executive of the new-look Shropshire County Council.
The unitary authority was created in April this year when the old county council covering Shropshire merged with five district councils.

Yeah,  that’s going to be a huge strain.  They all had absolutely nothing to do, which is why they were closed.

Mr Ryley is one of the highest-paid figures in local government, earning more than £200,000 last year.
His £192,493 salary for 2008/09 was topped up with a £10,815 payment from the Government for his role as the returning officer in last year’s council elections.
Together, the combined pay-out eclipsed Prime Minister Gordon Brown‘s salary of £194,250.
Mr Ryley is lined up to take over from interim chief executive Sheila Healy, who earned a salary of between £149,000 and £170,000.
It is expected he will start his new Shrewsbury-based post in September.
The Shropshire council covers a population of 290,000, compared with Hull where there are about 250,000 people.
During his time in Hull the city council has gone from being labelled the worst-performing local authority in England to being judged a three-star performer – out of a possible four stars – by the public spending watchdog the Audit Commission.

OK I’m sure he’s got something between his ears, but is running a Council taking instructions from central government, and splurging largesse to one’s buddies, really so traumatic a task that it requires paying at the same level as the job of Prime Minister?

He has also witnessed a dramatic political turnaround, with Labour losing its long-held grip on power to the Liberal Democrats.

One bunch of socialists replaced with another determined to spend even more.  Music to his ears no doubt.

Despite the council’s progress, his salary has remained a controversial talking point.
Earlier this month one leading union official at council said Mr Ryley’s pay could no longer be justified.

You mean, it used to be justified?

Speaking to the Mail after the chief executive confirmed plans to reduce “unsustainable” redundancy pay-outs at the council, Unite convenor Dave Mathieson said: ” At a time when Mr Ryley is proposing to cut the conditions of his staff, I think he should be doing the same with his own salary.
“I do not believe that paying him more than the Prime Minister is justifiable.”
His looming departure is expected to see deputy chief executive Nicola Yates fill his shoes until a permanent replacement is found.
Ironically, she was previously chief executive at one of the five now defunct district councils in Shropshire before coming to Hull just over a year ago.
Well done, Shropshire.  We might not be the biggest, but where it comes to paying council executives, we’re right up there with the best.  Doesn’t it make you proud!  Give them more Solace, I say!
http://www.thesun.co.uk/sol/homepage/news/3409837/Almost-half-of-all-council-bosses-were-paid-more-than-the-Prime-Minister-last-year.html?OTC-RSS&ATTR=News


Why Is This Story Appearing In The Comments?  What’s Going On?

Further reading around this brings me to this blog –


Since our visit to Shrewsbury on Thursday Robert has upped the anti and has
written to all 74 Shropshire Councillors demanding they sack their Chief
Executive Kim Ryley, particularly as he dances to the tune of an entity by
the name of Greg Lance Watkins whom we know for a fact to be a friend of
paedophiles, whether or not he is actually one himself, although he does
hold convictions for firearms and GBH offences of which he appears to be
proud.
Certainly if Ryley is colluding with accomplices to paedophilia and other
such criminal low-life, surely neither Shropshire nor any other Council
should want him in post.
http://holliedemandsjustice-robertgreensblog.blogspot.com/2011/01/letter-to-shropshire-councillors.html
The Tap Blog is a collective of like-minded researchers and writers who’ve joined forces to distribute information and voice opinions avoided by the world’s media.