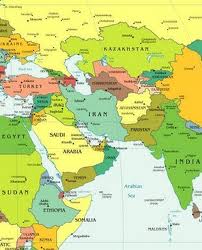 The West’s military-corporatist alliance, the OWG, is building an alliance between NATO and the countries of Central Asia, which is undermining the Shanghai Cooperation Organisation, which tried to pre-empt NATO’a arrival in the region, when the SCO was formed in 2001.  The SCO brought all the countries of Central Asia under a Chinese and Russian umbrella, but the invasion of Afghanistan has since enabled the OWG to override the SCO, and pull the key countries away from China and Russia, isolating them.


One of the aims of what is now called the NDN, the OWG’s Northern Distribution Network, is to build a pipeline for gas to be transferred across Turkmenistan, Afghanistan, Pakistan and India, transporting 30 billion cubic feet of gas a year.  Another is to offer business opportunities the countries adjacent to Afghanistan which draw them into loyalty to NATO and the OWG.


This (rather long) article from Global Research explains why the West went into Afghanistan, and what the longterm strategy is.  There is no mention of terrorism anywhere.  Oil and gas, and regional influence, on the other hand, are very much on the agenda.  If you are interested in what the real reasons are for the wars our country is fighting in the region, and could fight in the future, this article, penned by researcher Rick Rozoff is as good a guide as I have seen.


The U.S. and Britain, with the support of the North Atlantic Treaty Organization, invaded Afghanistan and fanned out into Kyrgyzstan, Tajikistan and Uzbekistan in October of 2001, less than four months after Russia, China, Kazakhstan, Kyrgyzstan, Tajikistan and Uzbekistan founded the Shanghai Cooperation Organization (SCO) to foster expanding economic, security, transportation and energy cooperation and integration in and through Central Asia. In 2005 India, Iran and Pakistan joined the SCO as observers and Afghan President Hamid Karzai has attended its last five annual heads of state summits. [1]

Now the U.S. and the NATO have over 150,000 troops planted directly south of three Central Asian nations.

Kazakhstan and Turkmenistan are also on the Caspian Sea, a reservoir of oil and natural gas whose dimensions have only been accurately determined in the past twenty years and where American companies are active in hydrocarbon projects.

After the U.S. invasion of Afghanistan, the Pentagon and its NATO allies deployed military forces to, in addition to Soviet-constructed air bases in Afghanistan, bases in Kyrgyzstan, Tajikistan and Uzbekistan. The first two countries border China.

As of last March the U.S. military confirmed that a monthly average of 50,000 American and NATO troops passed through Kyrgyzstan’s Transit Center at Manas as part of the war in Afghanistan. Also last year, U.S. officials mentioned building new military training centers in Kyrgyzstan and Tajikistan.


The State Department’s Blake delivered a speech at the James A. Baker III Institute for Public Policy at Rice University in Houston, Texas entitled “The Obama Administration’ s Priorities in South and Central Asia.”

Shorn of superfluous banter and obligatory diplomatese, his address accentuated American geopolitical designs in an area which Blake highlighted as being of vitally important interest to Washington:

“Central Asia lies at a critical strategic crossroads, bordering Afghanistan, China, Russia and Iran, which is why the United States wants to continue to expand our engagement and our cooperation with this critical region.” [2]

In furtherance of U.S. designs in an area that not only abuts the four nations named, but if controlled by the U.S. would prevent regional cooperation between them except insofar as it is mediated by an outside power, Washington, Blake listed the three priorities for the region as being to:

Build a strategic partnership with India

He commented after the above itemization: “After describing these priorities at greater length, I will then focus on energy resources in Central Asia, which I imagine is of particular interest in Houston,” where ConocoPhillips,  Shell Oil Company and Halliburton’ s Energy Services Group have their headquarters.

The State Department assistant secretary also emphasized the role of the recently activated Northern Distribution Network (NDN) in moving supplies, military equipment and troops to the Afghan war front from the west, promoting the concept that “The NDN increasingly offers the people of the Central Asian countries the opportunity to sell goods and services to NATO troops in Afghanistan, and we hope it can help catalyze greater trade and economic cooperation between Afghanistan and Central Asia.”

The U.S. has assiduously worked to ensure that Chinese, Russian and Iranian influence in Central Asia and Afghanistan is blocked and instead promotes the economic, transportation and security integration of the region through the Pentagon-NATO Northern Distribution Network. The U.S. and NATO intend the NDN to supplant the SCO as the engine of economic and security integration in Central Asia. To date eleven of the fifteen former federal republics of the Soviet Union – all except for Armenia, Belarus, Moldova and Ukraine – have been incorporated into the NDN grid originating in the Baltic and Black Seas.

Washington is also exploiting Afghanistan and Central Asia to attain an even larger prize. Again according to Blake, “South Asia, with India as its thriving anchor, is a region of growing strategic and commercial importance to the United States in the critical Indian Ocean area.

“In total, the region is home to over two billion people – roughly one fourth of the world’s population.”

He elaborated further on the main strategic objective of the wider Afghan war when he stated that “projects with India in Afghanistan mark a small but important part of a significant new global development  – the emergence of a global strategic partnership between India and the United States,” as “by 2025 India is expected to become the 3rd largest economy in the world, behind the United States and China.”

“Secretary Clinton and other Cabinet officials will also travel to India this spring for the U.S.-India Strategic Dialogue, which oversees the entire spectrum of our cooperation. “

Blake also reminded his audience of an initiative instituted last year and conducted under his jurisdiction: Annual Bilateral Consultations (ABCs) with all five Central Asian countries. In his Houston speech he stated, “I look forward to starting the second round of ABCs with Uzbekistan next month in Tashkent.”

Blake’s boss, Secretary of State Hillary Clinton, visited Uzbekistan last month – the first secretary of state to do since Colin Powell’s trip there in December of 2001 – as well as Kazakhstan and Kyrgyzstan, and Uzbek President Islam Karimov just returned from Brussels where NATO had invited him to visit its headquarters and meet with Secretary General Anders Fogh Rasmussen. While in the Belgian capital he also met with European Commission President Jose Manuel Barossa and Energy Commissioner Günther Oettinger. Uzbekistan, though poor in oil supplies, is one of the largest producers of natural gas in the former Soviet Union.

But remember, if the OWG succeeds in taking over the economies of all these countries, the result will probably be deeper poverty for all the ordinary people of the countries involved.  The elites will get richer, and the giant corporations.   Just look at what has happened in Iraq to get the picture.  Western Empire-building is only a business in the end of the day, and a highly unprincipled one at that.  If China can deliver better living standards to millions of poor people by operating a less vicious economic approach, the OWG will find itself winning the game of war, but losing the peace.  In fact they seem to fear peace, as only through endless war can they keep themselves in the driving seat.  One day their unhappy citizens will walk away and find  way to get rid of the slavery of the OWG’s greed to consume all it finds.

5 Responses to “The Real Reason The West Invaded Afghanistan.”