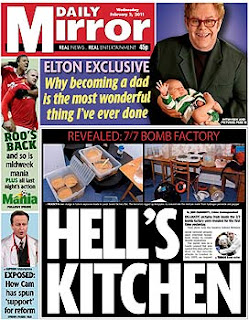 Today’s front pages have not one but two stories going back to terror events, 911 and 7/7, trying to create new spin which reinforces the original official versions of these events.  The Daily Mirror has one story claiming to show pictures of the ‘hell’s kitchen’ where the bombs were made that killed 50 Londoners on 7/7.  The Daily Telegraph carries the story that there was another group of terrorists at large on 911, who escaped, headlined ‘The Gang That Got Away’.  Both get full front page for stories which are very ‘old’, and clearly manufactured and supplied by ‘government’. 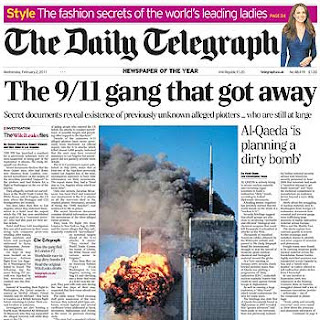 You have to say it is odd to be getting two such stories on the same day.  The mind manipulators have no doubt requested that this kind of story be run, for this to happen.  It’s not coincidence.  That, in turn, suggests they are worried that the British are at last starting to wake up that many of the terror events we witnessed, were either false flag, or at least, were not prevented, when they easily could have been.  911 and 7/7 were both false flag events, of course.  Search either on this blog for the real facts.