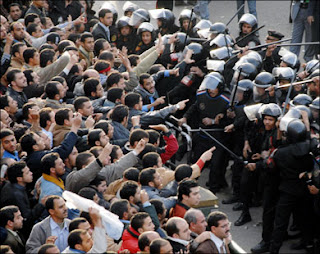 A spontaneous act of ”people power”?  In fact  it’s not quite the way the media tells it day after day.

This piece from Global Research explains how the CIA and the OWG select and control the make-up of future governments, which replace their older stooges like Mubarak, as they come up for retirement/removal.  The CIA became discredited for carrying out too many interventions, and became a black term in news reporting, so nicer sounding ‘democracy-promoting’ organisations were established, like Freedom House and The National Endowment For Democracy, all still controlled  by the CIA of course.

The cooptation of the leaders of major opposition parties and civil society organizations in anticipation of the collapse of an authoritarian puppet government is part of Washington’s design, applied in different regions of the World.

The process of cooptation is implemented and financed by US based foundations including the National Endowment for Democracy (NED) and  Freedom House (FH). Both FH and the NED have links to the US Congress. the Council on Foreign Relations (CFR), and the US business establishment. Both the NED and FH are known to have ties to the CIA.

“The NED was established by the Reagan administration after the CIA’s role in covertly funding efforts to overthrow foreign governments was brought to light, leading to the discrediting of the parties, movements, journals, books, newspapers and individuals that received CIA funding. … As a bipartisan endowment, with participation from the two major parties, as well as the AFL-CIO and US Chamber of Commerce, the NED took over the financing of foreign overthrow movements, but overtly and under the rubric of “democracy promotion.” (Stephen Gowans, January « 2011 “What’s left“

While the US has supported the Mubarak government for the last thirty years, US foundations with ties to the US State department and the Pentagon have actively supported the political opposition including the civil society movement.  According to Freedom House: “Egyptian civil society is both vibrant and constrained. There are hundreds of non-governmental organizations devoted to expanding civil and political rights in the country, operating in a highly regulated environment.” (Freedom House Press Releases).
In a bitter irony, Washington supports the Mubarak dictatorship, including its atrocities, while also backing and financing its detractors, through the activities of FH, the NED, among others.

Under the auspices of Freedom House, Egyptian dissidents and opponents of Hosni Mubarak were received in May 2008 by Condoleezza Rice at the State Department and the US Congress. They also met White House National Security Adviser Stephen Hadley, who was “the principal White House foreign policy adviser” during George W. Bush’s second term.

Freedom House’s effort to empower a new generation of advocates has yielded tangible results and the New Generation program in Egypt has gained prominence both locally and internationally. Egyptian visiting fellows from all civil society groups received [May 2008] unprecedented attention and recognition, including meetings in Washington with US Secretary of State, the National Security Advisor, and prominent members of Congress. In the words of Condoleezza Rice, the fellows represent the “hope for the future of Egypt.”
Freedom House, http://www.freedomhouse.org/template.cfm?page=66&program=84 (emphasis added).

As hundreds of thousands of Egyptian protestors gathered in central Cairo’s Tahrir square Tuesday, a coalition of the opposition groups said they would only hold talks with the regime after President Hosni Mubarak leaves the country.
Newly appointed Vice President Omar Suleiman announced on Monday that Mubarak had authorized him to open dialogue with all political parties to end the Egyptian crisis, however, the offer, according to Suleiman, has been denied.
“We have already formed a coalition made up of 10 people including Mohamed ElBaradei for dialogue with the regime, but only after Mubarak steps down,” Mohamed El Beltagy, a senior member of the largest opposition group Muslim Brotherhood, told Xinhua.
The Tap Blog is a collective of like-minded researchers and writers who’ve joined forces to distribute information and voice opinions avoided by the world’s media.