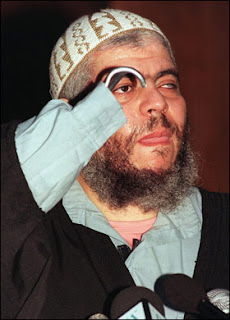 Anyone who opposes the wars in Iraq or Afghanistan can be placed under surveillance.  As an opponent of the wars, you are defined in the same category as a terrorist.  All citizens are to be treated as suspects.

The Patriot Act was passed as a temporary measure only during the shock created by 911.  It has to be renewed.  It has always been renewed, and Obama looks set to renew it again.  All the Civil Liberties organisations went crazy in 2001 complaining against the Patriot Act, but have now gone to sleep.  Russ Feingold, an ex-senator, has spoken out stating that a Police State is being created, while he sees that all opposition has gone to sleep.  Why is that?

The same measures are coming to Britain.

My fellow blogger Yasin Akgun, owner of www.politicalpundits.co.uk started writing recently that he has it on good authority that Abu Hamzir is an MI5 stooge and on the UK government payroll.  In three successive days, Yasin’s phone was cut off.  His two email addresses went dead, and his bank account was frozen.  The branch of his local bank was mystified.

So don’t think this only applies to the USA.  Political opposition to the war is regarded as an act of terrorism by the powerful who control our societies, unseen.

One reason opposition is so quiet is the level of threat that gets deployed against people trying to oppose.  Nazism has already arrived.  It can only ramp up from here, I’m sorry to say.  Meanwhile the governments create terror ‘theatre’ featuring characters like Abu Hamzir, to keep the populations in fear, so that political opposition becomes more subdued.