The power of a worldwide banking cartel is a joyous experience, for those on the inside.

The Federal Reserve is a banking cartel, operating with the protection of the US government.  It operates in its own interests above the interests of the American people.  The same system operates in the UK.  The bankers operate the money supply in their own interests.  They get the banks into trouble, by milking them in rigged futures trades, and in other obscure derivative markets which they are able to manipulate unseen behind the scenes, until the banks go bust.  The banks are then bailed out by the governments, who pass on the costs to the taxpayers.  Ultimately the taxpayers are milked by the banking cartels, which are supported by our governments in doing so.

This guy wrote the book about the Fed called ”The Creature From Jekyll Island”.  He researched the history of how The Fed was formed by billionaires in the winter of 1910 in secret.  It makes a good story.

Thanks, Colin for sending it over.  I have seen it before but it’s worth a refresh, as it is so key to understanding why the banks are able to hold our governments and us to ransom.  This excellent post explains what the NWO and its banking cartel intend for America and the world, nothing less than the overriding of democracy, and its replacement with a totalitarian world empire. 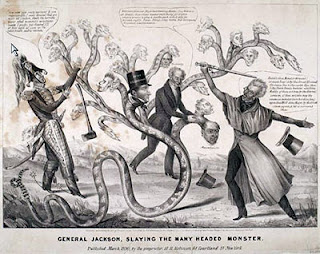 The biggest threat to the New World Order and their aims is the belief of personal liberty and the political self-determination that comes with it; which has stemmed largely from the United States since we were still colonies under British control.
That doctrine – which the whole of good humanity has aspired to and dreamed of for two centuries – and the future of what it entails is where We the People of the United States come in. What the banking cartel has been doing to other nations – engineered economic collapse via their economic hitmen and Wall Street jackals – is now being done to the United States. Our economy is being systematically destroyed through unprecedented debt via the private Federal Reserve. The goal – as it was in other countries who refuse to yield to global government – is to completely collapse the U.S. economy. Then – through the civil unrest and economic carnage that follows the collapse – install a centrally dominated, dictatorial government where, in the case of the United States, the Constitution and Bill of Rights no longer exist.
The Tap Blog is a collective of like-minded researchers and writers who’ve joined forces to distribute information and voice opinions avoided by the world’s media.