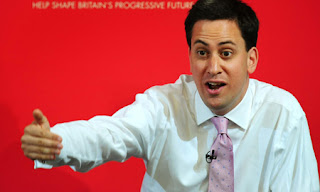 Something up your sleeve, eh Ed?

Peter Bone explains brilliantly the arithmetic and morality of the parties’ support or otherwise for an In/Out Referendum, as evidenced by their voting on the amendment in the House Of Commons last week.  The whole piece is well worth a read by any eurosceptic, but the really fascinating bit came at the end.

Not a single Labour MP voted against the In/Out referendum clause.


Peter Bone believes that Labour are preparing to launch a bid for the eurosceptic vote at the next general election, stranding the Conservatives, who have failed to provide a referendum on the EU as David Cameron promised.  This is now the Achilles heel of the Cameron Coalition.

Bone’s words were these –

3 Responses to “Are Labour Preparing To Launch A Bid For The Eurosceptic Vote?”