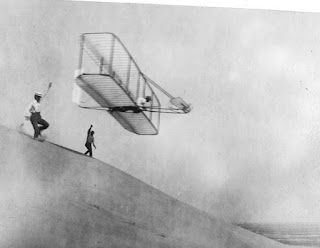 Kitty Hawk, where it all started, when Wilbur and Orville flew their kite on vacation

The airline’s website had me fooled nearly, putting my return ticket on the right date but in the wrong month when the tickets were issued.  Luckily I checked them and had them corrected.

Less reassuring was the farewell message as I checked in on here yesterday, ‘Have A Great Trip To America’, which is not where I’m going to at all!  But never mind.  The world of big corporations only has to please Big Brother.  Mere passengers are incidental to the main picture, whereby the few dictate all that must happen in their One World Empire.

I am used to the vagaries of this website, which last time I flew confused the last time to check in with the departure time, having two numbers suggested by the text, and only one provided.  I missed the flight, and was told that many people make the mistake I had made every day of the week, and that the company had been informed.  I was required to buy another ticket immediately.

This time I intend to arrive earlier than ever and not fall into any of their booking traps.

I woke an hour before departure from the house, which gives me a few minutes to express a few of these thoughts on here.  Otherwise unless my new i-phone can assist, that might be it today.  Next time I check in here, it will be from far away.  No political battles to be fought this day on The Tap.  There was one thing…