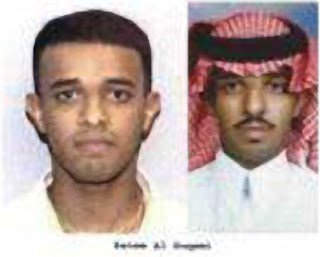 Remember these two brothers who were supposed to have died on 911?  Satam al Suqami, Wail and Waleed al Shehri  –  Ten years on, they’re alive……

There is no doubt that eight of the eighteen supposed hijackers who were said to have died on 911 while crashing planes, are still alive.   So why do a majority of British people think 911 was not a false flag theatricals designed to motivate America into war?  That’s because they haven’t seen the clear evidence that it was, as the BBC chooses not to reveal it to a British audience.

Match the ‘alive’ hijackers to the planes they were on which were supposed to have crashed, on this website

How can the 9/11 Commission be taken seriously when they refer to alive ‘hijackers’?

They rubbed out tens of key witnesses who knew 911 was a false flag operation.

One Response to “911 Hijackers Still Alive. BBC Recorded A Press Conference Given By One.”