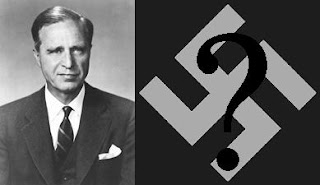 Sometimes a piece of journalism is more than journalism.  It reveals such key information that it changes perceptions of history.  This post covers just such a case.

Obama and Clinton are peas from the same pod, the same pod as Reagan and the two Bushes.  The Presidents of the USA have all been Bush-approved occupants of The White House, according to this report, for over 30 years.  The fact that one or two defeated Bushes in the elections makes no difference.  Democracy since the assassination of the Kennedys has been pretty much a delusion, a delusion maintained for nearly fifty years.

The Kennedy assassinations were not the start of the changeover, but the culmination of the takeover of the US Republic by Darker Forces.  Earlier attempts had been made and defeated.  After JFK and then RFK were gone, there was no longer an effective democratic system.

Prescot Bush, father of President G.H.W. Bush along with JP Morgan and others, had first attempted to assassinate a President in 1934, Franklin D Roosevelt and take over the country.   Their intention was to convert the US into a Fascist state with martial law, along the lines of Hitler’s Germany, which Bush admired.

They intended to intern the Jews in the US, the unemployed and political opponents into concentration camps. They hired the wrong general to run the coup, and they were found out, and stopped in time.

Duncan Campbell of The Guardian reported this story in Britain in 2005, and many other actions of Prescot Bush, G.W.Bush’s grandfather and the same events as described in this 10 minute Youtube video.  See how the story was reported in Britain in 2005.  The documents which substantiate the reports were declassified in 2004.
The Bushes ran a Nazi money-laundering operation throughout the war. They transported NAZI spies into the US. Their biggest clients were Thyssen and IG Farben, who set up and organised Auschwitz. They moved NAZI assets out around the globe until 1951, and were complicit in building the NAZI war machine before and throughout the war.
Arnold Swarzenegger is the son of a Nazi, praises and emulates Hitler. The Patriot Act brought out after 911 has destroyed all US civil rights, the same as Hitler’s Reichstag Fire was used as the excuse to destroy civil liberties in Germany before WW2. The Bushes are Nazis, practising Nazi philosophy, mimicking Nazi tactics. All the Presidents placed in the last 31 years have been Bush men. Blair was their chosen one in Britain to bring us into their takeover of all our societies and attempt to take over the world.
WW2 is not over yet.  Nazism is far from defeated.  David Cameron, Nick Clegg and William Hague are also being used to further the cause of the totalitarian One World Government, as they close their forces in on Iran, Pakistan and China.

In the US, concentration camps have been built, and the facilities are ready to process millions of corpses.