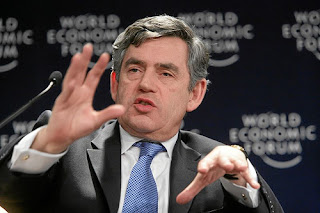 Was he putting a bit  by for a rainy day?

Many people know that China and Japan are big holders of US government debt, but how many people know that the next biggest holder after these two is Britain?  The other really odd thing about that is that up until 2008, Britain didn’t hold many US Treasuries, about $60 billion.  How is it that over 2009 and 2010, a time when we apparently were becoming heavily indebted, ourselves, to the tune of over £1 trillion, we bought over $150 billion of US Government debt in the same period?

See this chart in which the US Government lists the totals of its overseas holders of US government debt.

Do you ever get the feeling that there are things going on that we will never understand, or rather never be told about?

Let’s try to make sense of the figures.

The government claimed it was borrowing £155 billion in the year up to April 2010, yet in the Treasury December 2009 Spending Outturn Report, spending was reported as being down by £60 billion on the projected levels.  There was no explanation as to where the savings had been made.  There were some sizeable accounting adjustments, or deductions from the totals of TME, but none were explained.  It looked fishy.

If we assume that £60 billion was used from the £200 billion to keep the claimed government borrowing totals on track, that would have left £110 billion to place.  That figure happens to match exactly the $160 billion placed into US Treasuries in this period.

Brown and Darling clearly feared a bigger collapse or were advised that one was imminent and that the £200 billion was required so it was issued.  In the event the collapse didn’t happen, or at least it used up less cash than feared, but the government’s revenues did collapse, by £60 billion.  These had fallen from £605 billion in 2008 to £496 billion by April 2009.  Brown and Darling kept anticipating a recovery but none came.  Instead their revenues plummeted further, possibly below £450 billion.  They used the £60 billion cash that fell into their laps to tidy up the books pre-election, which otherwise would have looked ghastly.

I tried looking at the 2010 Treasury Spending Outturn Report, but the figures were much more obscure this year than last.  They’ve realised that even dumbo bloggers like me can read their reports and see they are not right.

What we all noticed also was the horrific November 2010 borrowing figure, of £23 billion, up from £16 billion in 2009.  No doubt Osborne will be needing to tap into the same bunce to save his face in April 2011, but with an even bigger bite. He might as well.  The Labour opposition won’t dare say a word.  They intended  the funds to be available for their own use, but lost the election!