‘Well He Would, Wouldn’t He’ was a phrase made famous by Mandy Rice Davies. 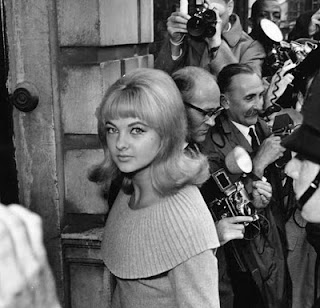 The Famous Quotation was made by 19 year old Mandy Rice Davies in 1963, when she was told by a barrister in a court hearing that Lord Astor denied sleeping with her.

She replied,’ Well he would, wouldn’t he!’

While giving evidence at the trial of Stephen Ward, charged with living off the immoral earnings of Keeler and Rice-Davies, the latter made a famous riposte. When the prosecuting counsel pointed out that Lord Astor denied an affair or having even met her, she replied, “Well, he would, wouldn’t he?” (often misquoted as “Well he would say that, wouldn’t he?”).[5] By 1979 this phrase had entered the third edition of the Oxford Dictionary of Quotations.
She traded on the notoriety the trial brought her, comparing herself to Nelson‘s mistress, Lady Hamilton.[6] She converted to Judaism[7] and married an Israeli businessman, Rafi Shauli, opening nightclubs and restaurants in Tel Aviv. They were called Mandy’s, Mandy’s Candies and Mandy’s Singing Bamboo. Rice-Davies made a series of unsuccessful pop singles for the Ember label in the mid-’60s, including “Close Your Eyes” and “You Got What It Takes”.
A famous Private Eye cover at the time of Profumo had a photograph of “the lovely” Rice-Davies with the caption (without any headline or other identification), “Do you mind? If it wasn’t for me – you couldn’t have cared less about Rachman”.[8]
In 1980, with Shirley Flack, she wrote her autobiography, Mandy. In 1989, she wrote a novel titled The Scarlet Thread. A bizarre follow up to the former was that journalist Libby Purves, who had met Rice-Davies when Mandy was published, invited her to join a female recreation on the River Thames of Jerome K. Jerome‘s comic novel Three Men in a Boat. This expedition was commissioned by Alan Coren for the magazine Punch, the other members of the party being cartoonist Merrily Harpur and a toyAlsatian to represent Montmorency, the dog in the original story. Purves has recounted how she “immediately spotted that this [Rice-Davies] was a woman to go up the Amazon with” and, among other things, that “only Mandy’s foxy charm saved us from being evicted from a lock for being drunk on pink Champagne.”[9]
In the 1989 film about the Profumo affair titled Scandal, actress Bridget Fonda portrayed Rice-Davies, alongside Joanne Whalley as Christine Keeler.
She once described her life as “one slow descent into respectability”.
If only the UN could manage that!  False Flag Terrorism, like Prostitution, will always be denied by the Perpetrators.  There’s something a little bit smutty about it all.  It’s never meant to be found out about, but it always is.
The Tap Blog is a collective of like-minded researchers and writers who’ve joined forces to distribute information and voice opinions avoided by the world’s media.