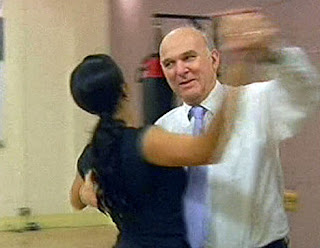 Vince Cable has at least one foot in the real world.  His Bio doesn’t mention his schools.

Andrew Neil’s programme last night about why all political leaders come from the same schools and universities stopped short of asking the important questions.  If the people are not fixated with desire for ex-public schoolboys who go to Oxford, then why are they continually selected.  In a democracy you would expect the people to prefer people more like themselves.

Neil never once mentioned the process in which leaders are chosen.

As the Russians found, public schoolboys make the better traitors, often having less connection to their families, their communities and their country than the working class.  They are bred within a culture of intense individual competition, and many becoming extremely concerned with themselves.

So now also do the corporatists of the OWG  find them convenient traitors, as the Russians did.  They (the OWG) had such a blistering success with Blair doing their bidding in return for his £60 million pay-off (so far – billionaire status beckons), that anyone who wants media and corporate backing has to pretend to be the next Blair.  They don’t want individuals.  They want a sausage machine of predictability.  Cameron was going round claiming to be the next Blair to appeal to the bosses, not the voters.

Funny how Neil mentioned every Tory leader except Howard and IDS.  They wouldn’t have fitted the show’s simplifications at all.

Here was one grammar school boy (Howard) and an ex-public schoolboy, (IDS), who wouldn’t spout the glib propaganda and soundbites required by the elite, but who spoke from the heart, and refused to comply with the demands of the corporatists.

What Neil might have mentioned is that those who comply with the demands of the corporatists are selected, and kept in place, and hugely rewarded.  Those who don’t are got rid of in short order. IDS, an ex-public schoolboy was so not-required that Neil doesn’t even dare mention him.  He too knows what is required of the OWG corporatist elite – SpAds who understand that understand the system that power is money, and money is power.

Look at Vince Cable.  He tried to take on Rupert Murdoch.  You can’t do that and expect to survive in British politics.  He’s made the same mistakes as IDS – trying to think out what’s right, and not just sell out to the powerful.  Like IDS, Cable was another who had had a life in the real world working in business for a number of years before going into politics.  Such people realise how important good policies are to the real world, and are not required by the corporatists, who only want outcomes that make them yet more money.

Cable will be IDSed from hereon, I wouldn’t doubt, and eventually will be quietly disappeared, unless he learns his lesson and conforms.  He obviously didn’t realise he was merely being required to play Falstaff to Cameron’s King Henry in return for a nice fat payoff.  He’s still there, but he must, for some reason, only now be realising what the game of power actually consists of.  Good ideas and justice count for nothing.  Coporate profits rule Britain just as surely as they rule the world.  Our democracy is just a sham.

But while we have Vince Cables running around, we still have a chance that democracy will prevail in the end of the day.  Here is a common sense measure being taken today.
http://playpolitical.typepad.com/liberal_democrats/2011/01/watch-vince-cable-explains-why-the-government-is-making-it-harder-to-people-to-take-former-bosses-to.html

AS FOR TRAITORS, REMEMBER THE CAMBRIDGE FOUR…

The Cambridge Five was a ring of spies, recruited by Russian talent spotter Arnold Deutsch in the UK who passed information to the Soviet Union during World War II and at least into the early 1950s. It has been suggested they may also have passed Soviet disinformation to the Nazis. Four members of the ring have been identified: Kim Philby (cryptonym: Stanley), Donald Duart Maclean (cryptonym: Homer), Guy Burgess (cryptonym: Hicks) and Anthony Blunt (cryptonym: Johnson); together they are known as the Cambridge Four. Several people have been suspected of being the “fifth man” but John Cairncross (cryptonym: Liszt) was identified by Oleg Gordievsky. Others have been accused of being members.
In his 1994 book “The Fifth man”, Roland Perry identified Nathaniel Mayer Rothschild, 3rd Lord Rothschild as the fifth member of the Ring Of Five. The book covers the story and his life from World War 2 up to his death in 1990 and details how he covered his tracks, including manipulating Peter Wright during his autobiographical work on the Ring of Five (“Spycatcher”) to maintain his cover.
Their name alludes to the fact that they became Communists while attending Cambridge University in the 1930s. There is conjecture as to the dates they were recruited to Soviet intelligence; Anthony Blunt claimed that it did not happen until they had graduated. Burgess and Blunt were Apostles — a secret, elite debating society based around Trinity and King’s Colleges. Blunt, a few years older than the other ring members, was a talent-spotter, recruiter and Apostle as well as being Fellow at Trinity, where most of the others were undergraduates. Burgess also assisted with recruitment. John Cairncross, another Apostle, suspected by many of being the ‘Fifth Man’, was not formally identified until 1990. Other Apostles accused of spying for the Soviets included Michael Whitney Straight, Nathaniel Rothschild, research fellow Lewis Daly and Guy Liddell.
The name that stands out in that list is the Illuminati Nathanial Rothschild.
The Tap Blog is a collective of like-minded researchers and writers who’ve joined forces to distribute information and voice opinions avoided by the world’s media.