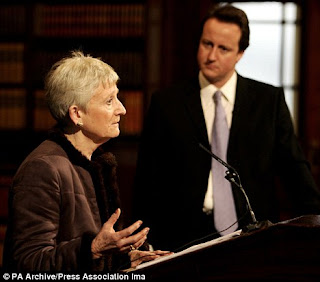 There is a website which lists out the individuals who are believed to have foreknowledge of 911, and who took part in the event in one form or another.  There are 103 people on the list.  Two of those are British.
Here is the full list –


One question I would like to put to Pauline Neville-Jones is why did the BBC announce the collapse of WTC 7 23 minutes before it fell?


FURTHERMORE  – what is she doing now running counter-terrorism for David Cameron?

The Baroness, 70, was appointed Minister of State at the Home Office in charge of security and counter-terrorism by David Cameron – a more junior position than the one she hoped to get, which restricts her responsibilities to domestic intelligence issues.  She hoped and expected to be appointed National Security Adviser to Cameron.
The demotion is said by sources to have ‘infuriated’ the feisty former career diplomat so much that she threatened to resign even before she took up the post.

A senior security source revealed that the Baroness’s appointment was blocked after MI5 produced a report about her links to two controversial Russian oligarchs.
According to a source, MI5 sent the Prime Minister’s aides a confidential briefing about her connections to two billionaires with alleged links to organised crime and a Russian mafia leader.
The source said: ‘The job of National Security Adviser to the Prime Minister needed a high-security vetting clearance because it involved knowing and handling sensitive state secrets.
Read more: http://www.dailymail.co.uk/news/article-1303215/MI5-vetoed-Security-Minister-Baroness-Pauline-Neville-Jones-links-Ukrainian-oligarchs.html#ixzz1CX4mmVN4
It’s not nice to think that Britain’s counter-terrorism is in the hands of someone who knows all about false flag terrorism, and is suspected of taking an active role in it.


Did she actually have a hand in it, as the 911 suspects website suggests?
Again ask her the question –
‘How did she know that WTC 7 was going to fall.  Why did she have it announced that it had fallen 23 minutes before it actually fell?
Did Cameron know she is suspected of being involved in false flag terrorism before having her appointed with responsibility for Britain’s counter-terrorist intelligence?
Surely we deserve to have someone who wants to prevent terrorism, not to use terrorism against us, and keep us locked up in wars by killing us and making us think it’s being done by others.
from whodidit.org – the two British suspects, who will no doubt one day face trial for their actions on, before and after 911 and 7/7, ex-Prime Minister Blair and Pauline Neville-Jones.
The Tap Blog is a collective of like-minded researchers and writers who’ve joined forces to distribute information and voice opinions avoided by the world’s media.