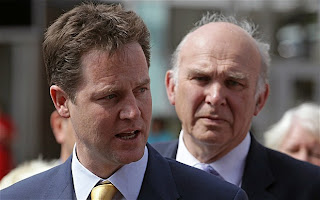 Cameron’s strategy of linking with the Lib Dems is in tatters, not because he couldn’t keep the coalition together, but because the Lib Dems are disappearing.  In the latest YouGov Poll, they are on 8%!!!

The left wing of British politics has consolidated behind the unlikely Ed Miliband at about 42%, while the ‘right’ wing is divided between a Lib Dem rump of 8% down from 22% at election time!, 37% supporting Conservative and maybe 6% supporting UKIP.

You can never extrapolate trends and expect to be proved right, but if today’s EU Bill debate goes against Conservative backbenchers and they don’t flex their muscles and bring Cameron to heel, you could imagine support for UKIP surging to over 10% and Conservative support slipping back to under 35%.  Even with every remaining Lib Dem vote going Conservative, an unlikely scenario,  Cameron and Hague would be well short of a majority, even in a fair electoral system.

The only way to put Humpty Dumpty back together again, from there, will be for UKIP to be pulled into a coalition.  Things are moving far faster than anyone expected.  No doubt there will be more unexpected outcomes on their way.  Commentators will be lost for words as they struggle to fit the given narrative to what is actually happening.