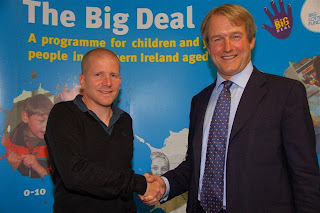 Getting Jobs For Kids Is What Northern Ireland Urgently Needs

There are very few members of the current cabinet with business experience, according to Dizzy’s recent post on his blog Dizzy Thinks.  IDS worked in business after leaving the army, a fact often overlooked.  Dizzy didn’t even include him amongst the handful who came through to cabinet rank with hands-on business management experience, most taking the Special Adviser route to office.  The SpAds, as special advisers are called, are running all three political parties now, according to Guido Fawkes and Mike Smithson of Political Betting.


Another somewhat overlooked cabinet member, who ran a business for many years, and, as a result understands what business is all about , is Owen Paterson, Secretary Of State For Northern Ireland, and also the local MP where my business in the UK is located.  He has always been excellent at representing us when regulation has got plain daft, working tirelessly to get in front of the relevant committees, and write letters to the ministers concerned.


When in opposition, he handled Transport briefly, and also MAFF – Farming and Fishing.  He persuaded the IDS regime to adopt a policy of repatriating fishing to Britain from the EU, but Cameron overrode that, and dropped it in 2005, which was a great shame.


It is no surprise, then, to find Owen at the forefront of an initiative to awake Northern Ireland from its heavily subsidised slumbers, and give it a kick, by making it into a fast paced enterprise zone, with the best corporation tax rates available in Britain.  EU rules would stop this, as the subsidy to NI would need reducing by the same amount of any taxes sacrificed.  But as NI has no or very few large corporations located there, the potential sacrifice of subsidy is much smaller than the potential gains to be had by attracting international investors into the province.


It is rare indeed to find a government Minister offering tax breaks to business in 2010, anywhere in the world.  Bravo, Owen Paterson.   This is sheer bloody intelligent.   Let’s hope it comes through quickly and gives investors a badly needed boost, and kids in Northern Ireland a reason to get up in the morning.

The FT
The aim is to put the region on a level playing field with the Irish Republic, where businesses pay 12.5 per cent tax. In the UK, the rate is to be cut from 28 to 24 per cent over four years. Attracting increased investment would reduce the £10bn annual transfer but also the level of welfare payments as jobs are created.
In line with the the coalition agreement, Mr Paterson has brought forward a paper “to look at ways to rebalance the economy, including looking at the possibilities of a variation in the rates of corporation tax”.
The paper is currently with the executive, before going to public consultation. “We want their ideas. This won’t fly otherwise,” said Mr Paterson.
Under European state aid rules, autonomous regions can have differential tax rates so long as there is a compensating reduction in the subsidy from central government. When the Labour government considered this issue at the top of the boom, this was calculated at about £310m – the amount of tax the Treasury would have to forego by allowing Northern Ireland to set a lower rate of corporation tax.
Economists say that, in Scotland, because the corporate tax base is so much bigger, moving to a lower rate of tax would result in a much larger reduction in the annual subsidy.
That is not the case in Northern Ireland, where one legacy of 30 years of political instability is a dearth of big companies.
http://www.ft.com/cms/s/0/7582c080-2722-11e0-80d7-00144feab49a.html#ixzz1Bx6MgJnY
The Tap Blog is a collective of like-minded researchers and writers who’ve joined forces to distribute information and voice opinions avoided by the world’s media.