My Grandfather’s next command, The Prince Of Wales, on which he took Churchill To meet FDR at Augusta Bay in 1942.  She was sunk later that year off Malaya by the Japanese.   By then he was fighting on the Malta Convoys.


This is an extract of an account of the day after HMS Hood was sunk in the North Atlantic in July 1941.  Blogging this was prompted by the discussion on Political Betting where people seemed to think that a maritime reconnaissance capability was unnecessary.  I was saying that Nimrod should kept until its replacement is operational, not scrapped.

The Rear-Admiral Commanding, Second Cruiser Squadron, with his force proceeded at 28 knots on the course which would bring him soonest within 100 miles. He hoped to get near enough to launch the attack by 2100, but a short engagement with Prince of Wales caused the enemy to make ground to the westward; and became apparent that the Victorious could not be within 100 miles of them before 2300. The Rear-Admiral Commanding, Second Cruiser Squadron, therefore ordered the striking force to be flown off at 2200, some 120 miles from the objective.
35. The Victorious had only just commissioned. She was about to carry a large consignment of crated Hurricanes to Gibraltar, there to be assembled and flown to Malta, when she was put under my command for this operation. The only operational aircraft she had on board were nine Swordfish of 825 and six Fulmars of 820 Squadron. She had only had a week to work up and the Fulmar crews were far from fully trained. 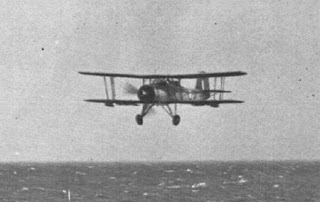 A swordfish.  Bismark’s air defences were not calibrated to deal with such slow aircraft.
The Commanding Officer had decided that nothing less than the whole of 825 Squadron could be expected to produce any result in a torpedo attack. He realised that the Fulmars were far from ideal for shadowing, but decided to use them to maintain touch, in the hope of being able to launch another torpedo attack in the morning.
36. The nine Swordfish were flown off at 2210, followed at 2300 by three Fulmars and at 0100 by two more as reliefs. The weather was showery with squalls; wind north-westerly, fresh; visibility good, except during showers. Sunset was at 0052.
7. 825 Squadron, by very good navigation and with the assistance of the ASV, located the Bismarck at 2330 and altered to the southward with the object of making their attack from ahead. The cloud was increasing and they lost touch, but after circling round for some time located the Norfolk and Prince of Wales and were redirected by the former. A few minutes later the ASV gear again indicated a ship and the squadron broke cloud to deliver their attack, only to find themselves over a United states Coastguard cutter. The Bismarck was six miles away and, observing this incident, opened H.A. barrage fire, keeping it up throughout the attack. Eight aircraft got in their attacks, the ninth losing touch in a cloud layer and failing to find the target. At least one hit was obtained.
38. This attack, by a squadron so lately embarked in a new carrier, unfavourable weather conditions, was magnificently carried out and reflects the greatest credit on all concerned. There can be little doubt that the hit was largely responsible for the Bismarck being finally brought to action and sunk. The value of ASV was once more demonstrated; without it, it is doubtful whether any attack would have been possible.
The Rear Admiral commanding the second cruiser squadron was my grandfather.
The extract came from HMS Hood Association website
http://www.hmshood.org.uk/reference/official/adm234/adm234-509tovey.htm
My PB Comment 128.  In reply to – Against countries such as China and Russia the UK would be helpless.
The primary threat we could face in future could be from a country we have come to regard as an ally.

If the US is subjected to Martial Law under the Patriot Acts, and the camps are filled with political opponents, racial and social ‘undesirables’, and Congress emasculated, the OWG will wish to export its totalitarian agenda from the USA to other parts of the world.

Britain might have to face up to a hostile USA in these circumstances, if we were to attempt to preserve our democratic existence – with the Nazis coming from the opposite direction on this occasion.

The Germans could be our allies.

by Tapestry January 28th, 2011 at 20:57
The Tap Blog is a collective of like-minded researchers and writers who’ve joined forces to distribute information and voice opinions avoided by the world’s media.

5 Responses to “MY FAMOUS GRANDFATHER”