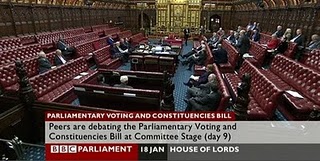 The Lords filibuster has already struck a blow.  The timetable for introducing the legislation might be left until later in the year.  Nick Clegg is saying that the AV voting system and the reduction in the number of MPs by 50 might be left until September.

Well done, the Labour Lords.  British Democracy might survive this latest onslaught from its so-called ‘government’.

Nick Clegg, the Liberal Democrat leader, insisted that the Government would hold firm and continue to hold votes through the night to see off the dozens of rebel amendments which the Opposition has tabled in a bid to bog the Bill down.
But privately, in the “unlikely” event that the filibuster succeeds, the party is drawing up a “plan B” which would see the referendum being delayed until later in the year – probably the second or third week of September.

Also of note today is the coming together of David Davis and Jack Straw to oppose the Strasbourg ruling of the European Court Of Human Rights that Britain must compensate her prisoners for not allowing them to vote.  A Labour and Conservative backbench alliance against the government over this measure indicates that new forms of resistance to any further loss of Parliamentary power are breaking out at the Palace Of  Westminster.

MPs seem ready to fight, as do Lords, to stop the erosion of their sovereign powers.

The enemy is the current government in alliance with the EU, which seems hell bent on reducing the power of Parliament to that of a Parish Council.  Ed Miliband really has to be congratulated.  His brother was a One World Government stooge.  Between Miliband D, Cameron and Clegg Parliament was finished.  Miliband E. seems not to be willing to sell out Parliament any further.

If the crossparty rebellion prevents the loss of 50 MPs and defeats AV, Conservative backbenchers will be greatly encouraged to stand up more strongly against Cameron over the EU.