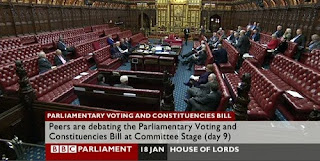 They Shoot Horses, Don’t They?  Ageing British Lords Don’t Die So Easily
This is democracy fighting for its life against the One World Government, which wants MPs and Lords reduced into slavish zombies who obey every command from on high.
Cameron and Clegg are carrying on with their masters’ bidding, hoping for vast pay-off, just as Blair has received for destroying our democracy. Blair ensured that elections can be rigged to order by introducing postal and proxy voting, without controls. Cameron and Clegg want AV so that elections can be made more time consuming and complicated, and be rigged with more ease, and the result made impossible to verify.


The numbers of MPs are being reduced, without explanation.  People are bemused.  A gradual thinning of numbers increases the power of governments, and makes MPs fearful for their seats.  They tend not to rebel.  It’s outrageous.  Cameron is clearly a One World Government bullyboy determined to stuff Britain into the power of the elites and put democratic accountability into a prehistoric cave.
The Lords are trying to stop him.  Has Labour under Miliband woken up?  Is Kinnock really about to turn against his Paymasters?  Are Labour the Party that will stop the destruction of British democracy?


REPORT FROM MIKE SMITHSON on Politicalbetting


Can Labour’s peers stop the bill?

The marathon and unprecedented overnight sitting of the House of Lords is still going on. As I write at 6.25am, Lord Kinnock, the former Labour leader and not someone known for his brevity, has just got to his feet so one can assume that there’s a lot of life in this yet.
Whenever things have been put to the vote the government has had comfortable majorities.
The debate on the government’s plans for an AV referendum and reducing the number of MPs began at 3.38pm yesterday afternoon and Labour is hoping that its action might impede it.
Special arrangements have been made to deal with the peers, many of them in their 70s and 80s.
The bill must become law by February 16 if the planned referendum is to take place on May 5th.