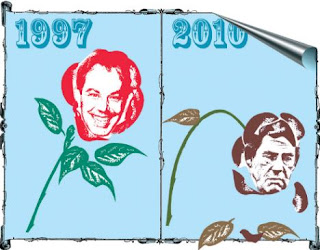 This appeared in the comments on PB today –

I was actually made redundant 3 times under labour but never once under a Tory government. I was thrown out of work and taken back on half the wages and the leave with the conivance of the union. Never been a union member since that day.
Parents at my daughters school for all the 3 terms of the Labour government have helped to self finance the oversized classes in the school, maintain it and also buy books and other teaching aides so please just feck off with your ‘Always Ok with Labour its all Fatchers fault” Platitudes.
Prostitution remained rife in the local areas and potentially is even worse now and the cardboard boxes never went away as Labour would have you believe. I along with others feed the homeless weekly and see it first hand up front and in real time. It has in my mind became worse since 2006 onwards.
I was also old enough to remember the unions in the 70’s dictating to the Government the rubbish uncollected and bodies unburied in the street and left in refridgerated boxes as well as the IMF laying down the law. I did my homework for O level finals in the dark next to a bloody candle due to power custs and strikes.
This is the consequences of Labour and again you see the financial disater they have again inflicted on us so we have to ensure all the same again. This time though with no pensions or hope as as they viciously stole our old age while at the same time intentionally and knowingly stealing the future of my children and grandchildren simply to feed their political ends. A truly sad and wicked state of affairs.
You should Never believe Labour can be trusted with power or the economy as someone always has to put it right afterwards with all the pain that goes with it. Never believe the stuff that oozes from Roger and the other Labour apologists as history always shows them up for what they are.
Did Newcastle change in anyway after 13 years? not one iota with the exception a lot of them got placed in public services.
The city of Manchester reported this morning to have the highest youth unemployment in Europe. That did not happen in 6 months so who was responsible for that long term decline?
Round here the homeless remain homeless and we do what we can.
Thats the true cost of Labour
The Tap Blog is a collective of like-minded researchers and writers who’ve joined forces to distribute information and voice opinions avoided by the world’s media.

One Response to “Labour Cost”