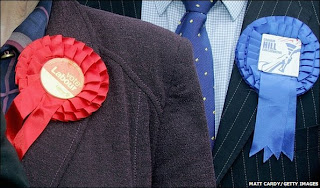 Labour MPs in alliance with Conservative backbenchers could be fun….over the EU.  Just 38 rebelling Conservative MPs would be needed, and the European Union Bill could fall.  It would be the EU’s first defeat in the British Parliament in history.

It’s very interesting to see Ed Miliband opposing the EU Bill.  His brother would almost certainly have supported it, had he been Labour leader.  The end of New Labour might be the end of the EU’s control of the House Of Commons.  Let’s hope.
http://www.telegraph.co.uk/news/newstopics/politics/conservative/8235239/Cameron-faces-Commons-defeat-over-Europe.html
Conservative backbenchers are preparing to ambush the controversial European Union Bill which goes before the Commons when MPs return from their Christmas break.
Eurosceptic Tories will table radical changes to the legislation, which they claim does not deliver on its promise of a referendum on future transfers of powers to the European Union.
If the changes strengthening the legislation are not accepted by the Government, some Conservatives said they might even vote down the entire Bill.
Last night Labour sources signalled that Ed Miliband, the Labour leader, will order his MPs to oppose the legislation too.
The prospect of a pincer movement of Labour MPs and Tory rebels is acutely worrying for Mr Cameron, whose Coalition majority of 76 would be overturned if just over half that number of Tories joined forces with Labour.
Telegraph today.

My earlier post foretold an imminent backbench rebellion, the most clicked post from December.  This could be it!!!!

And watch Roger Helmer explaining the rebelliousness of Conservative MPs against the EU.

The Telegraph suggests that Labour are open to backing Tory eurosceptic rebels on this matter, although it is surely unlikely that Labour would repeat its feat from the tuition fees vote and deliver a 100% turnout of its MPs. Then there are the assorted nationalists and Unionists to factor into the equation.

Thus far there have been three noteworthy Tory rebellions on European issues since the general election**:
** A fourth division relating to matters European – namely a motion tabled on December 14th supporting the Government’s approach of working closely with the European Commission to deliver a strong, principles-based framework for financial sector corporate governance – saw just one Tory MP, Philip Hollobone, registering a vote against.
So who were they? (2010 intake are marked with an asterisk*)
A hard core of 5 rebelled on all three of those divisions:
A further 13 rebelled on two of the three divisions:
And 27 rebelled in one of those three divisions:
That is a total of 45 Conservative MPs who have voted against the Government in relation to Europe.
It would require pretty much all of them to vote against a three line whip again on January 11th to ensure the defeat about which the Telegraph speculates – and my personal hunch is that this is unlikely. That said, there is over a week to go before the vote and both the rebels’ and whips’ intelligence-gathering operations will be hindered by the fact that MPs do not return to Westminster until the day before the vote.
The Tap Blog is a collective of like-minded researchers and writers who’ve joined forces to distribute information and voice opinions avoided by the world’s media.

6 Responses to “Labour Conservative Historic Alliance Against The EU”