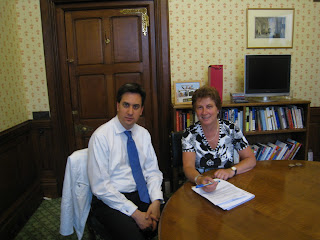 Simon Heffer is rumoured to be supporting Ed Miliband.  Is it true?  The comments thread in Political Betting last night was full of such suggestion.

Heffer is of the right, I think it is fair to say, so how can he be supporting the Party of the Left?

Ed Miliband’s personality is not one that inspires and shines like a latter day Blair.  He is not grim and dour like Gordon Brown.  He’s more the safe and steady schoolmaster giving the end of term peroration, delivered with geekish overtones, betraying a youth spent away from the pool table buried between the covers of deeply intellectual books.  Blair acted he had religion.  Miliband can’t act, but maybe he actually does have religion, not of a God-fearing variety, but of a political nature.  This could be new, a politician that believes in something other than himself.

He rose to prominence during the New Labour years, so it might be safe to assume that, like a stick of rock, he has New Labour policies etched throughout his being, and is, in short, a Europhile.  Neil Kinnock, who owes his post-Parliamentary career to the EU, notably supported him against his brother.

The Milibands are close in age and peas from the same pod, but do the similarities end there?  David is a rabid Europhile and One World Government lackey, savouring his connection to supranational power.  Could the more cryptic Ed yet be keeping something from us about his inner beliefs on such issues, which we will not see until he is brave enough to come out and tell us all?  There are signs.

It was notable that Tony Benn also supported Ed Miliband’s leadership campaign.  Now there is a politician that doesn’t worry too much about treading on anyone’s toes, and who leaves little room for doubt as to what he believes in – that being democracy, national sovereignty, euroscepticism and the traditional agenda of the left.

As we all know it doesn’t pay any politician that wants media approval to campaign openly against the EU.  The source of all power is seemingly being removed from Parliament (see yesterday’s Sovereignty debate where the Conservative backbench rebellion fizzled out before it had begun), and the holders of supranational power have a nasty habit of bumping off anyone who might seriously challenge them, literally.  Do you need the long list of corpses enumerating yet again?  To that list could be added that of fallen political leaders like IDS and Thatcher who tried to stand against the tide of totalitarianism, and were assassinated not with bullet, plane or car-crash, but by the media.

There was a hint in the newspapers and the blogs last week that Labour had considered supporting the Conservative backbench rebellion against the Coalition’s EU Bill in yesterday’s debate.  But as the backbench rebellion fizzled, the opportunity to defeat the government on this key topic of who actually runs the country never arose.  But why was there even a rumour of Labour backing Conservative eurosceptics?  I couldn’t imagine David Miliband allowing any such suggestion to surface to tarnish his euroadorative credentials.

Ed Miliband has had the great good fortune to become party leader  at the moment that the most europhile party in Britain, the Lib Dems are collapsing – from 22% of the popular vote at the time of the election, to around 8% now according to YouGov.  Two thirds of that support has gone to Labour, leaving the Hague Cameron Lib Dem strategy in tatters.  If Ed can hold down his job, it seems almost inevitable he will be the next Prime Minister, with Cameron unable to rally the right.

Cameron thought the centre ground of politics would be a profitable place to trade, but just as soon as he set out his stall, the world has moved on to a far less amenable era for that kind of politics.  People are reverting to their tribal loyalties as the economy grinds everyone down under a load of debts acquired during the endless credit boom, which kept New Labour afloat while the Euro was constructed.  The right is just desperate to find a leader that talks like Nigel Farage.  Cameron was out of season even as he arrived at Downing Street.

If the usual procedure is followed, he will lose the next election, resign and be replaced by someone who can put the Coalition of Conservative, Orange Bookers and the disaffected who’ve left to UKIP back together again.  Or could he fall sooner, as the Coalition’s electoral position deteriorates to the point of hopelessness?

Which leaves all  eurosceptic hopes, for now, banked up on the new Labour leader.  Could he though actually be a better con artist that we think?   He was Brown’s economic adviser and is said to have written the five economic conditions which must be satisfied before Britain joins the Euro, which were instrumental in keeping us out at the critical moment.  That will go down in history if it hasn’t already.  If the Simon Heffer rumours are right, the Euro conditions were not created in a mood of bookish duty by Miliband, but out of belief that the EU is wrong for Britain.

Eurosceptics have all just been roundly conned by David Cameron, whose role in the political theatre was to see the end of  Blair, Brown and New Labour, for which we are of course most grateful, but he now appears to have nothing else to offer.  Cameron just doesn’t seem to fit any more.

Cameron needs bogeymen in place to give him a role.  Ed Balls would have suited him perfectly.  Ed Miliband, unlike Blair and Brown, hasn’t got bogeyman qualities.  Cameron is lost without a ripe New Labour beast to sink his teeth into, as was Blair up against IDS.  You need two to tango, when it comes to creating political theatre.  Miliband’s not from the theatre, like Blair, or from the laboratory like Brown, but the library.

It seems that for now, with Cameron pulling up the white flag, we eurosceptics must hang our forlorn hopes on this strange creature of intellect.  If he can con people as effectively as Cameron did, you will find more Simon Heffers, if the rumours are true, people who will vote for a possible eurosceptic in any party, changing sides (from Ukip in Heffer’s case).  But then there is still the chance that Heffer is on to something, and that Miliband might be the genuine article.

One of the comments on Political Betting last night –

186/anyone.
Can someone please help me out here and post a link of the Heffalump actually supporting Ed Miliband? (Ed is eurosceptic by the way)

by Bobajob January 11th, 2011 at 23:15
Is it a rumour?  No one replied to Bobajob with a link.
Finally this from Political Betting at Christmas – 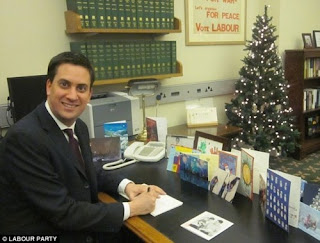 See the picture on the wall?  That wasn’t true under Blair or Brown.  Would it be true under Ed Miliband ?  Possibly.  Possibly not.  But that’s the key.  Would he have the strength of purpose to stand up against the OWG if elected?

3 Responses to “Is ‘The Geek’ A Eurosceptic?”